Challenge from ‘De Duif’ this summer: the sequel

in Art Journaling, Art by Marlene A4 journal, Mixed media 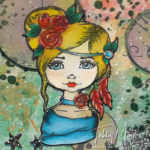 Filled with enthusiasm I started the challenge that Dutch art supplies store Hobbycompleet De Duif announced for this summer. However, what I could have known, but hadn’t really given enought thought, was that during the summertime the temperature in our house rises to extremes.

We’ve got a couple mobile air conditioners to keep temperatures in the living room and our office somewhat bearable. And furthermore we’ve got fans in the bedroom and my studio, but they give nothing more than wind, no coolness.

In short, after making the first video with the start of my art journal page, where I had worked out the first assignment, I was stuck. And even though I did try to work somewhere else, that just doesn’t work for me.

I need to easily get my hands on my stuff. But in advance I can never tell what I’ll be doing, or what the end result of a project should be. And so I can’t know beforehand what supplies I’m going to need.

In the end it all worked out fine, and I did finish the challenge! I have, however, taken my time. At least more than the seven or eight weeks that the challenge lasted. But it is done! And the temperatures have lowered enough that I can enjoy working in my studio again, at least in the evening.

The assignments were fun and left a lot of freedom to give it your own twist. Below I’ll mention them, so that you will recognize it later on in my end result.

You’ve possibly already seen the first assignment in the previous video , but if you haven’t, I’ll show you my version below once again: 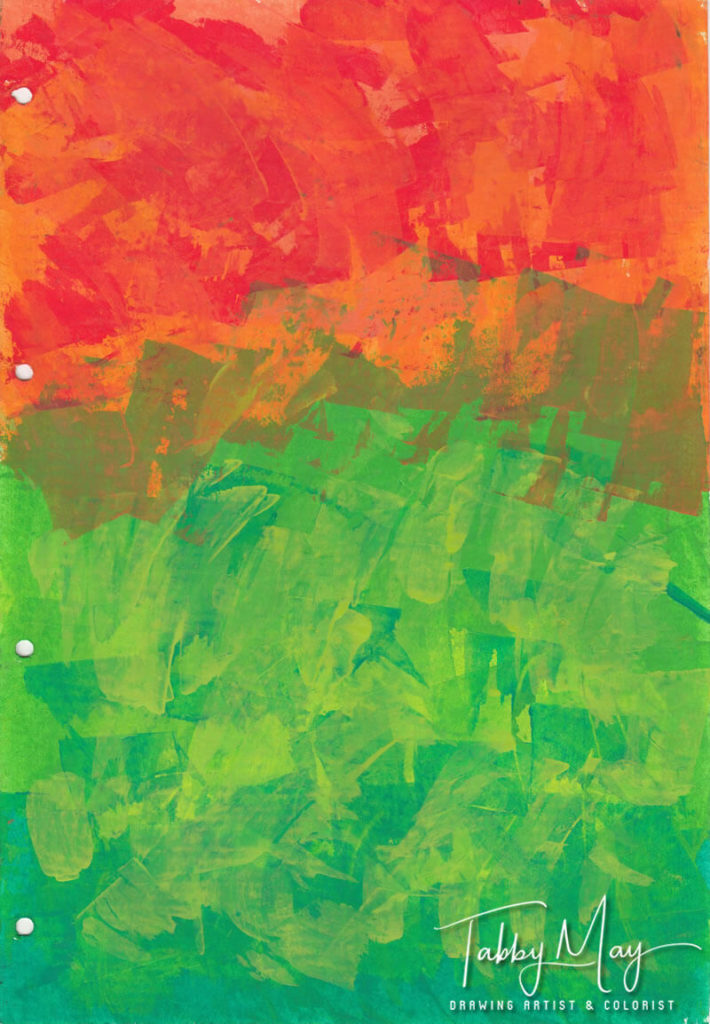 After that I added a thin layer of white gesso, which made it look like this: 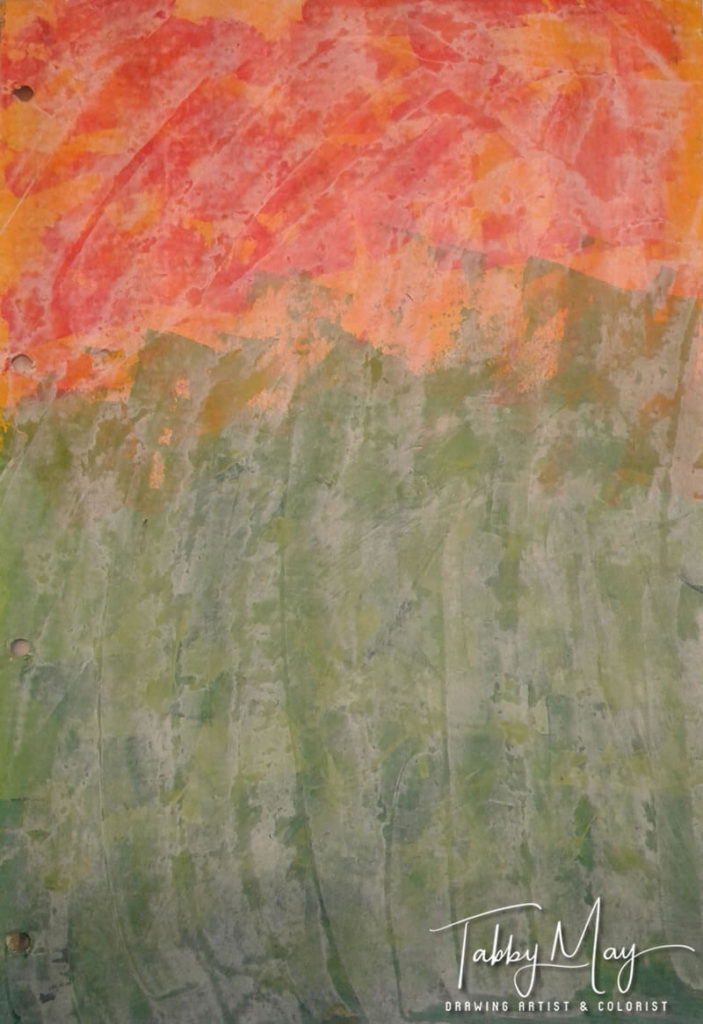 For the second assignment I took a piece of watercolor paper and played around with several colors Distress Oxide ink. Just until I felt I had a nice background. 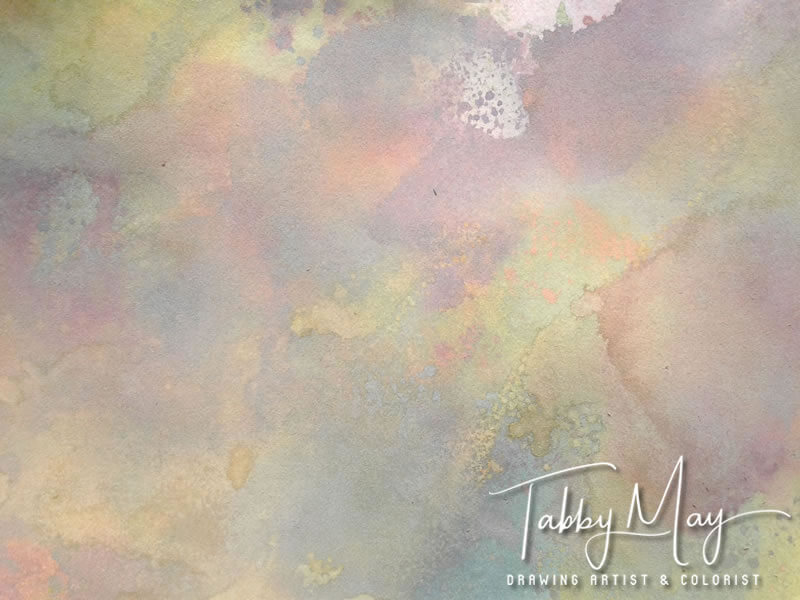 From that background I’ve die cut different sizes circles and loosely laid them on the page to get an idea of where I would want them: 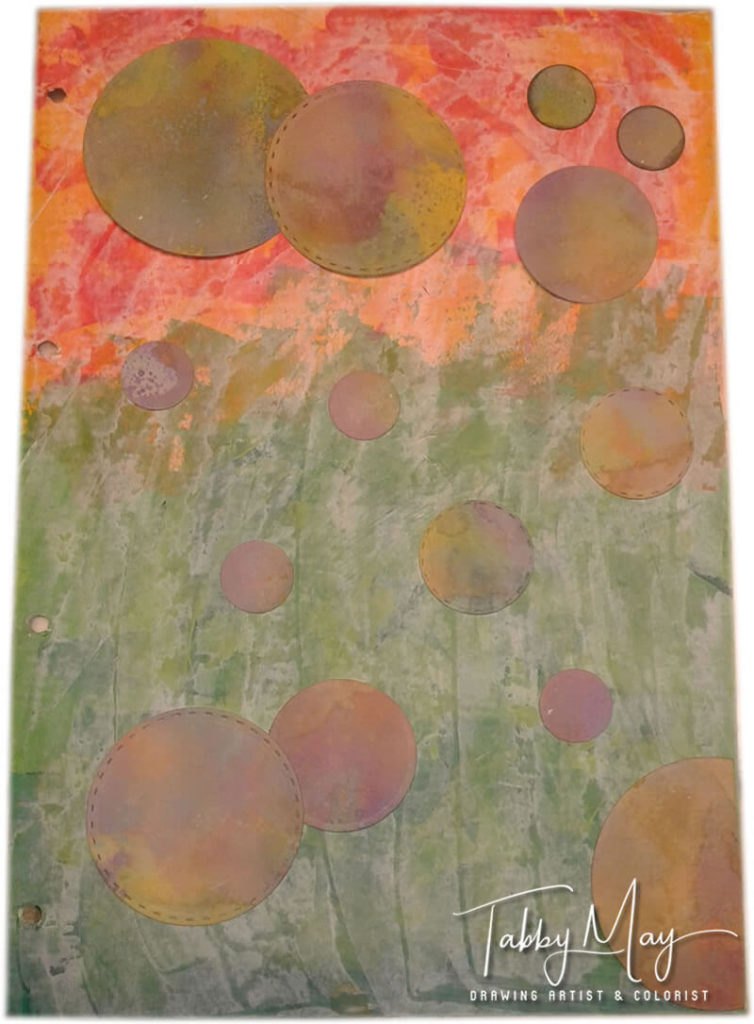 After I had glued them they were in slightly different places than above, but the effect was the same. It just looked kinda like a lot of planets. With a green Stabilo All pencil I’ve contoured all circles and faded that slightly with a water brush. 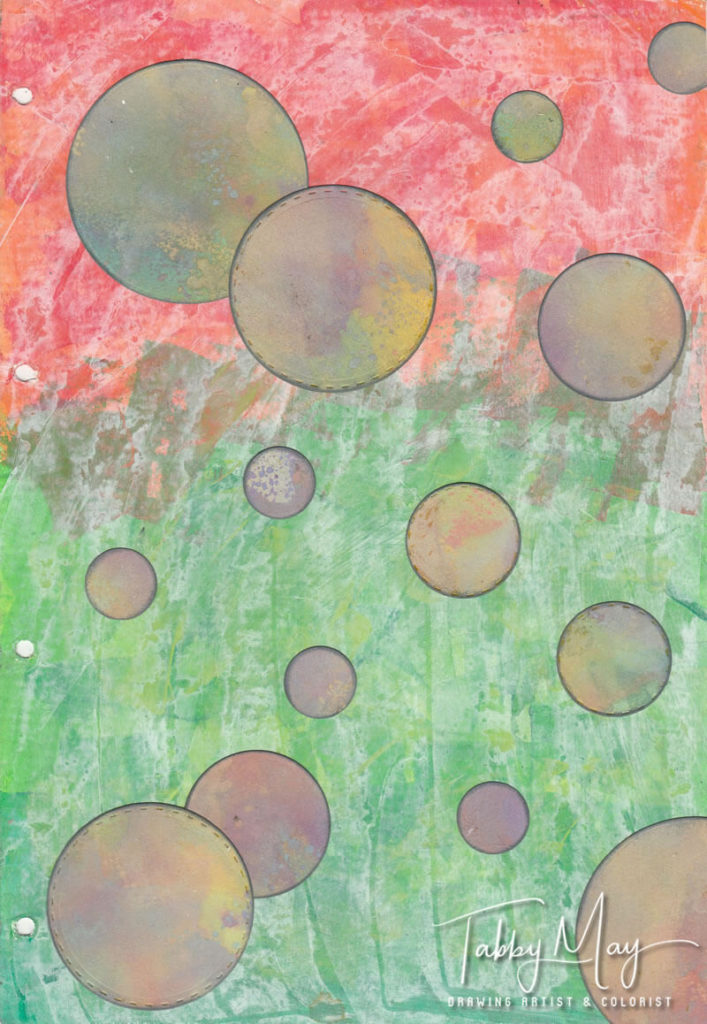 The challenge to continue

And when I was ready to take the next step, it suddenly became really hot in Southern Spain and I left everything the way it was and didn’t do anything anymore hahaha. The first opportunity I got to really get going, I entered a flow that made me forget everything around me. So I didn’t take any pictures of the separate assignments.

I can still recall for the most part what I did, but I didn’t write things down (except for the assignments of the challenge), so I don’t know all the details anymore. But I’ll give it a try 😉

Assignment 3 was the use of a mask, stencil or template. For assignment 4 one needed to add black or white. I can’t remember what stencil I had thought of for assignment 3, but it’s quite good possible that I’ve conveniently merged those two assignments, 3 and 4.

That would be the black stars then, that I’ve made with a stencil and adding Nuvo Glimmer Paste. The stars stencil is from Studio Light’s Bloom line by Miranda van den Bosch (MaskMB07). 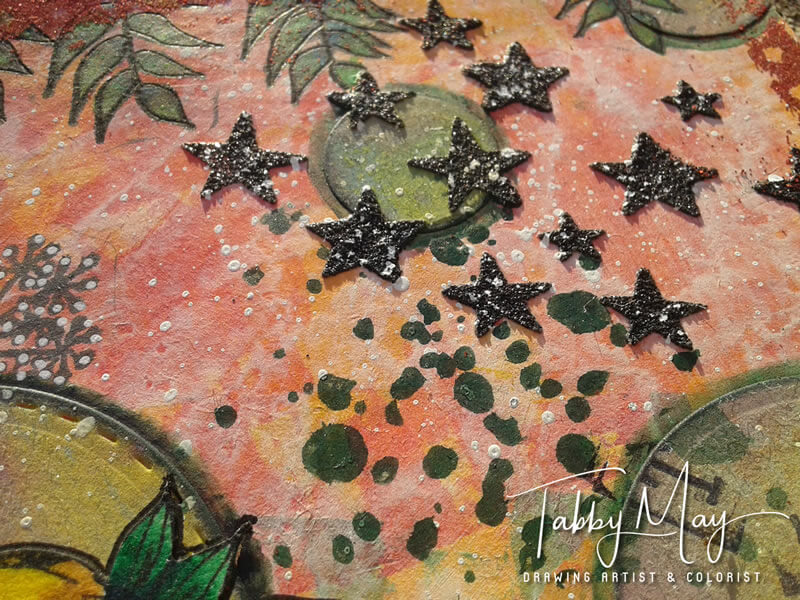 For assignment 5 I used the beautiful stamp from the set ‘Let love grow’ by LDRS Creative, designed by Andrea Gomoll (CCD105). What did I use to color the girl?

I’ve been thinking and thinking, but all I can think of are the Studio Light Markers (water based). So let’s just assume that I used those. 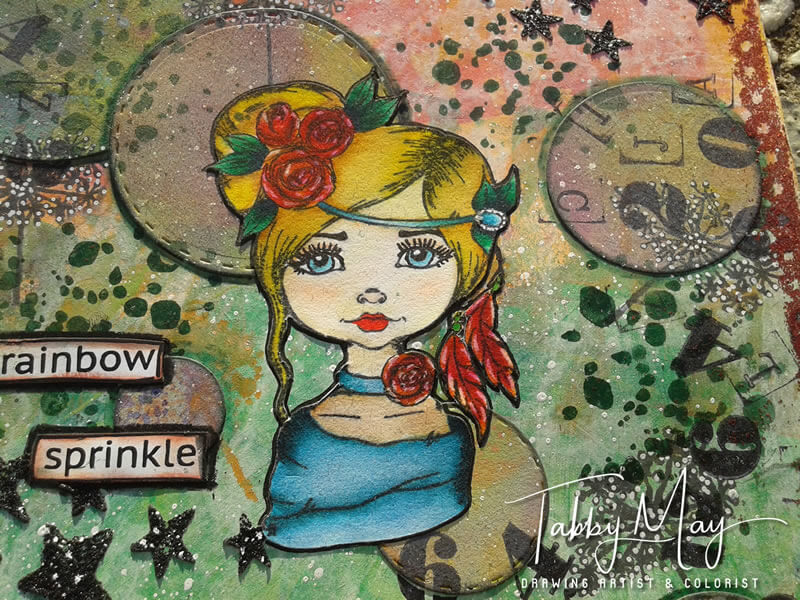 From that same stamp set I’ve also used the leaves to stamp the top edge, and a flower stamp (kind of faded dadelion). 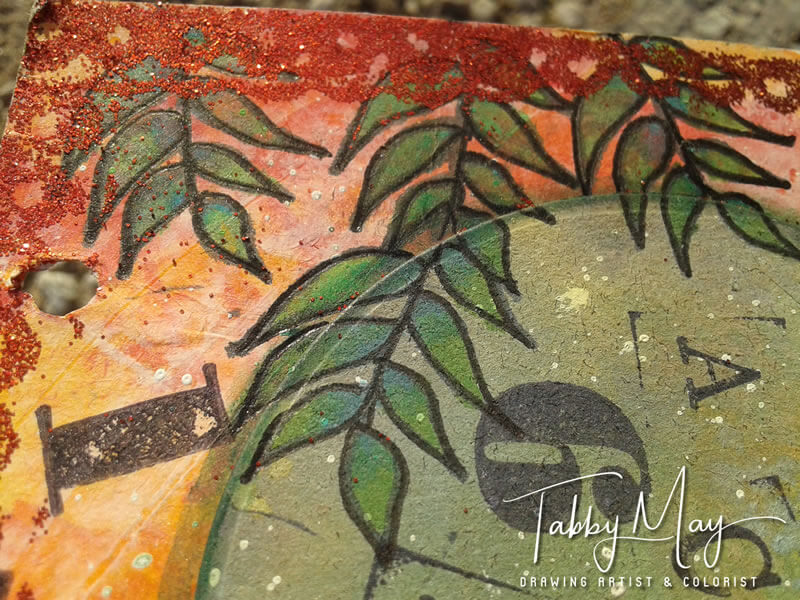 I’ve stamped the flower in two colors. I think I’ve used Distress Oxide. Hahaha, from now on I really must write down what I use, ’cause I just forget! 😀 I do remember that I added white dots on the flowers with a white water based Sharpie. 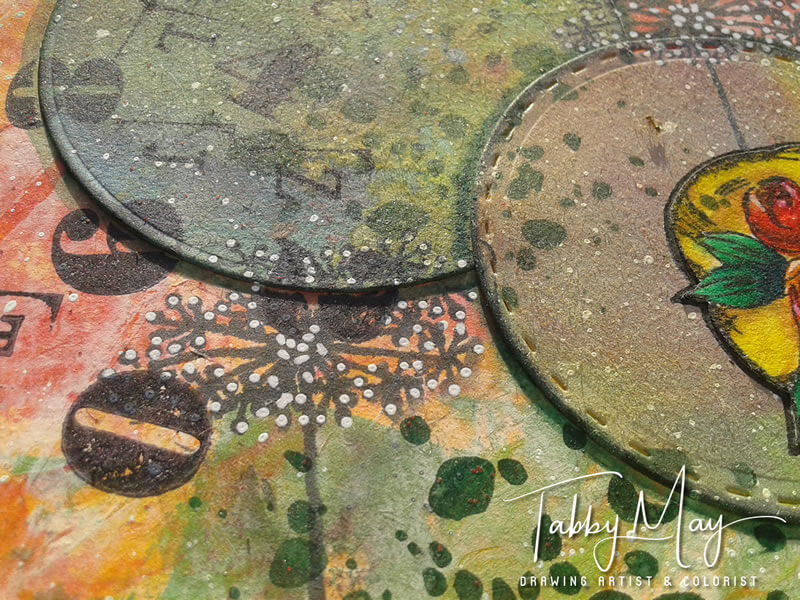 Just a serious note in between

For assignment 6 I’ve used a stencil with figures and individual letter stamps. Those letter stamps came from Aliexpress or Wish, when I still ordered there. Nowadays I don’t buy there anymore, since it became clear to me that really everything they sell there has been stolen. And the original designers get nothing in return. Ever since I found out, it just didn’t feel right anymore to buy any my supplies in China.

I’m a creating artist myself. I’ve recently drawn a few coloring pages for a 2019 planner and I’ve written several songs of my own, one of which was released as a single. I can’t bear to think of others running off with my creative expressions and making one on one copies to be sold for peanuts! And all of that without permission and without me as the author getting something in return!

But okay, I still have some things that I’ve bought there earlier, among which these letter stamps. And those I’ve used for this challenge. 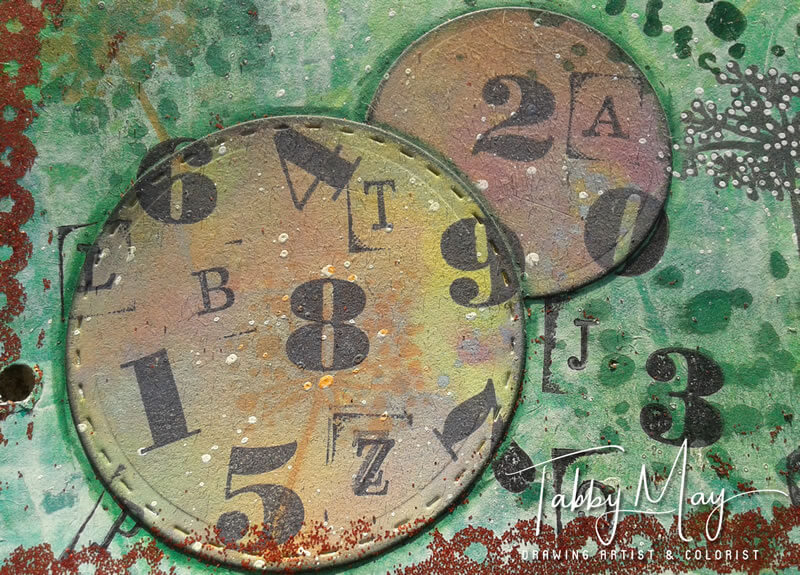 Finally assignment 7 said to finish the project any way you like. So I’ve made a border with red glitter and added a text by Dyan Reavely from Dylusions Coloring Sheets Borders & Quotes. Then I’ve splattered around with the white water based Sharpie. And I spotted green specks that I think were made with a stamp. Of course I’ve just got no idea what stamp that must have been… 😀

And so I’ve finished the whole challenge after all! And you know what? There’s a new challenge at ‘De Duif’… the Fall Challenge 2018! Who knows, maybe I’ll manage to join the whole ride hahaha…

Now obviously there’s one important picture missing: the end result! That one is in the short video below, and also in the photo album that I’ve made. There you can have a better and closer look at the pictures.

Oh and will you let me know in the comments what you think of my elaboration of this challenge? And of course you can also react to my Aliexpress/Wish argument 😉 Thanks!