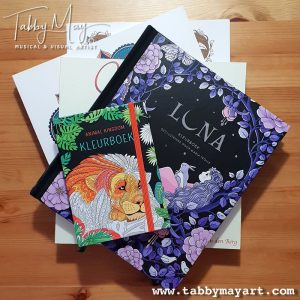 Wow, I never thought it would take me this long to write the sequel to part 1! But finally here it is, part 2 with the remaining five coloring books that I’ve brought to Spain from our trip to the Netherlands last November.

Click here to watch the ‘Tabby Reads‘ video in which I read this blog to you, this time on camera!

In part 1 I’ve already told that I find it hard to get back to a routine with the website. That hasn’t really changed. In my latest song recording blog I also mention this. I’ve been working on sewing curtains for our living room for a month now, and I just can’t get to finish them.

My mind is somehow sort of ‘blocked’ and I’m just happy that I manage to prepare three healthy meals a day, do the laundry and ironing, and keep the house as tidy as possible. And cuddle and play with dog Scruffy and cat Mercy a lot (and hubby too, of course haha).

Getting on with it

Well, right now I finally feel moved to start writing this second blog about the coloring books that I’ve brought. They’ve been on my desk since I wrote the first one, where they’ve been patiently waiting for me to find the words to talk about them.

And they deserve to be talked about, because I really like all of them! So, without further ado, here are the other five coloring books! 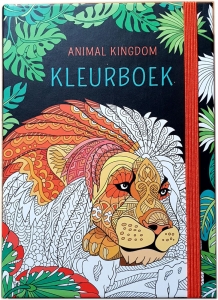 The first of these five coloring books is Animal Kingdom Kleurboek, a pocket size coloring book. Every left page contains a quote (in Dutch), every right page has a colorable image. I was looking around in the bookstore in the Netherlands, and this little coloring book caught my eye.

When I went through it, I really liked it. Mainly because it’s so small that it fits in my purse. I always like to bring one or more small colorings books with me wherever I go.

Okay, since we came home from our trip to the Netherlands we don’t travel anymore. We only leave home for the weekly groceries and changing empty gas cylinders.

We don’t even go out anymore for a coffee on a terrace (at the moment there’s no place to go anyway, everything is closed). So, right now I never take any coloring books with me, but hopefully that time will come again one day soon. Then I will take this small book with me.

I can already see myself sitting on a terrace, near the beach, with the Spanish burning sun above us, coloring at the table, while sipping a glass of fresh orange juice… Mmmmmm!

Another one from Masja van den Berg

On the very last day of our Dutch journey, Nov. 20th, I decided to buy this coloring book: Masja’s Mandala’s Spring. It’s not available in regular bookstores, so I decided to buy it online from Masja’s Etsy shop. On Etsy the costs for shipping and handling are already included in the price, which makes it easier to place an international order.

We got back home on the 23rd of November, and it arrived four days later. Pretty quick, especially since the mail isn’t always that fast since the whole world is now ordering online.

I just love Masja’s drawings, which you probably already know if you’ve been following me for some time. Her Spring Mandala’s book was the only one I didn’t have, so now my Masja collection is complete!

A new book from Maria Trolle 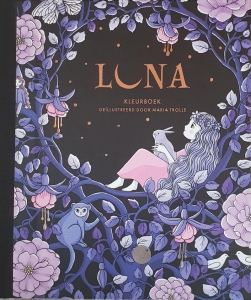 ext up is the latest book by Swedish illustrator and designer Maria Trolle. The book is called Luna. It’s my fourth Maria Trolle coloring book. (I somehow missed ‘Flora’. Don’t ask me why, because I really appreciate Maria Trolle’s drawing style.)

Luna is another book of hers that’s full of botanical drawings. Lots of flowers and plants, fairies and tiny animals. It’s utter cuteness in a book!

The only problem I have with her books, is that I’ve seen so many examples of magnificent coloring in her books, that I feel I could never do it justice with my coloring… Typical case of cold feet and feelings of being ‘not enough’… ?

Oh by the way, I’ve bought the Dutch version of Luna, published by BBNC/MUS. On Bookdepository.com you can order the English version. 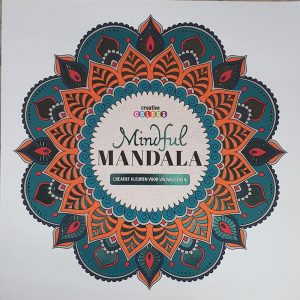 The fourth and second-last book for this post, is a book by the Dutch publishing company Lantaarn Publishers. The book is titled Mindful Mandala. Previously Lantaarn had mandala books in round shapes (like this one) and even one in a flower shape.

I’ve got four of those books, and when I saw that they released a new mandala coloring book, I actually expected it to be similar to the previous ones. So without a second thought I ordered it, from a Dutch bookstore.

When I got there to pick up my ordered books, I was slightly disappointed to find out that this book is totally different from the earlier ones. It’s thinner and it’s an ordinary square shaped book, where I expected (or hoped) it to be in the shape of the mandala on the cover.

Not so bad after all

But I could’ve known, since the price was lower. So I decided to set my disappointment aside and take it for what it’s worth.

And actually, it’s not so bad after all. It is significantly thinner than its predecessors, it only contains 47 designs, slightly less than half of the other books (no idea if they are all new or if there is an overlap with the previous books). But the older books, despite me liking them better for their looks, were easily damaged.

The spines of these older books are short, and thus not very sturdy. At least not after using them very often. So this book will probably stand the ‘durability test’ a lot better. I haven’t colored in it yet, but that’s my impression so far. 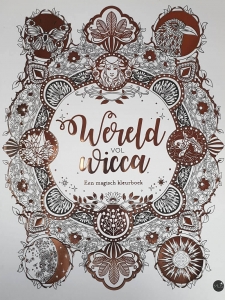 And then we’ve finally arrived at the last book of the total of ten. This book was one I really, really wanted to have, from the moment I saw it. It’s called ‘Wereld vol Wicca‘ (the original English title is ‘Believe in Magic‘) and it’s illustrated by Claire Scully.

I just love magic and nature, and I do my best to live with the seasons and in the rhythm of the moon. This book combines beautiful coloring pages with magical and ancient wisdom.

On the left pages there are short texts to explain many things about witchcraft, magic, astrology, rituals, nature and a lot more. It makes magic more accessible and easier to understand for people that aren’t familiar with a witch’s lifestyle.

Magic is actually best described as the ‘power of thought’. And that’s what modern day witches practice: using their thoughts to manifest whatever they want to manifest.

There is one thing that I don’t like about this book though. And that is the Dutch translation of the title.

What the publisher, BBNC/MUS, probably doesn’t know, or didn’t realize, is that a person identifying as a Wiccan is always a witch, but that there are many more witches that definitely don’t identify with being a Wiccan! It would have been better if they’d translated it literally to ‘Geloof in Magie’, instead of the name they’ve given it now. But they probably figured that it would sell better with ‘Wicca’ in it…

Anyway, I’ve also ordered the English version of this book, so I will use that one for the review that I plan to do for this one. And I can then also compare the paper of both versions. I’m already looking forward to that!

I’ve made it to the end

Well, it took quite a while, but I’ve managed to finish this blog post. Finally part two is written and done with, so now I can focus on filming flip-through videos and actually start coloring in these books. I better not make any promises about when the first review will be online, I’m afraid I will not be able to keep them…

Let’s agree that you’ll get to see it when I’m ready to post it, okay? ?

Disclosure: I’ve purchased these coloring books myself. I’m not affiliated with any of the aforementioned artists, publishers or shops. Also note my Disclosure Promos page!