Doodling for beginners. Can or can’t I do it?

About a week and a half ago Johanna Ans came with a question for the members of her Global Doodle Gems Review Team, of which I’m a member as well. It was about a coloring and drawing book of hers for which she would like to have more exposure on the internet. Whether we would feel up to do some doodling in one of her drawings from the book. For those of you who aren’t that familiar with the drawing and coloring jargon: doodling is actually very uncomplicated thoughtless drawing, just drawing without having a plan or a goal. At first I didn’t think this would be something I would like. Finishing a drawing, thinking of patterns and figures myself… am I able to do that?

But after a bit of good old ‘group pressure’ hahaha, I’ve let them persuade me and decided to give it a try. And in this blog I will share my experiences with this doodling adventure.

Check out the book

Below I’ve added a flip-through video of the book, to give you an idea of what it’s like. (Since I haven’t got the book yet, this video is not made by me, but I’ve shared it from Youtube.)

Per email I received three drawings from Johanna Ans. One was completely basic, another was filled up a bit with some doodling and the last one was finished and ready to colorize. All three of them were drawn by Johanna Ans herself. The assignment was ‘consider the finished design a coloring sheet, but also an inspiration for your drawing. You can keep it as simple as you wish and make it as difficult as you like.’ And so I took the basic design and started doodling. As simple as you wish… well, that’s easy. I started doodling in the center and added a small line, and then some more lines and then the first area was filled and simply done, as far as I was concerned. And I went on doing the same in five of the other alike areas.

Of every finished part I took a picture, since that was another part of the assignment: please capture what you’re doing with a lot of photographs. And that’s exactly what I did.

The hardest part was thinking of what kind of filling I wanted for the several blank areas in the drawing. Doodling is drawing thoughtlessly, but I had to make up how I should go about to get this drawing thing done. Suddenly I realised that I had done something similar a while ago when I was learning how to draw mandalas myself. So I decided to use the patterns that I had learned then for this drawing. And from then on I started getting the hang of doodling. Funny thing is that the further I got, the more inspiration I got for other patterns. And before I even knew it, it was all filled up! Drawing finished. Just like that, while I previously was wondering whether I would be able to do this. The answer is yes! Doodling, I can do it!

Then came the next challenge, the coloring. Normally that’s no problem at all, I choose my materials and start coloring and before you know it it’s done. But not this time. Johanna Ans asked for pictures, lots of ’em, including of the coloring. And she had recently told me how she loved the pictures of another member of our review team who takes pictures per color. So I thought to myself ‘let’s go crazy’ and decided to work one color after another and take a picture per color.

I chose to work with the Stabilo pen 68, a very nice pen with a nice range of bright colors. And what I normally seldom do, I did now: I picked all the colors that I wanted to use and layed them out on my desk in a specific order. I then decided to not use any color twice. Once a color was used and the picture was taken, that color would be considered ‘done’. Phew, did I make it hard on myself with that! All of a sudden I had to think of where I wanted to put a color in the drawing. And so I actually had to think of what I wanted this drawing to look like at the end. But I never do that. I never work with a plan! 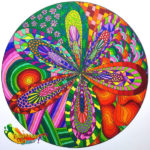 Frustrated and raised up

With the first color, yellow, it wasn’t so bad. I added a bit of yellow here and a bit of yellow there and took a picture. How hard can it be? I then moved on to a darker yellow, then orange and so I went on with the sequence of Stabilo 68 pens that I had laid down before me. Slowly I saw the design getting filled with color. And I hated it! What a jumble of disordered colors! The further I got, the unhappier I became with what was being created right in front of me. It felt like total chaos. One moment I even thought “I’ll throw it away”, but I’m not the quitting kind, so I continued. Too bad it wasn’t very nice, but I would finish this task till the end, no matter what.

And so I eventually reached the last pen and finally everything was filled with color. The coloring was done. And boy, did I find it atrocious! Messy, chaotic, like a bomb had exploded in my studio and all colors just hit places I would never had thought of putting them. But hey, I did take pictures. And I decided to record this in my coloring brain as a wise lesson for the future. I’ve tried it, I completely went out of my comfort zone and I didn’t like it, to put it mildly.

I decided to share my experience in the review team Facebook group and even shared a picture of my end result. And then something happened that I hadn’t seen coming. The others liked it! I couldn’t get my head around it. Finally I showed it to my husband and told him that this design was a complete disaster, that I found it horrible. And he looked at me, looked at the drawing, then back to me and said: “I think it’s wonderful!” Blimey… how can you like that? But he swore that he really, really likes it. So much that he would want to frame it and hang it in our office. ‘The guy is nuts’ is what I thought.

And even in the review team I got more positive remarks about what I thought was just a bit of messing around in this drawing. My review colleagues saw depth in it, they liked the colors… and I still don’t get it! But apparently I’ve made something that appeals to others.

So in the end this piece of art in which I’ve just been pottering around, gets the label ‘succesful’ after all, even though I still don’t fully agree 😉

Video of the progress

Below you can watch a video I’ve made of my photographs, in which you can see the whole process. From the drawing to the coloring onto the end result, in only one minute’s time. And that video is something that I really do like!

I don’t have this book myself yet, but I will soon order it. This whole drawing adventure tastes definitely like more!