Prizes… you win some, you give some 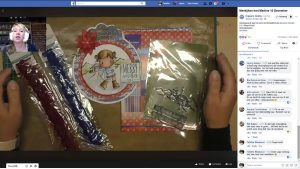 On Monday December 10th I watched a Facebook live video. Every Monday morning Martine from EvelinesDesign goes live and shows ideas to make cards, journal pages and lovely crafting projects. And on that particular day I watched and shared the ‘Meekijken met Martine’ video publicly to my time line.

Another thing is that every Monday there are prizes to win, and everyone sharing the video stands a chance. Usually the prizes are a couple of materials that were used by Martine in that particular video. And a couple of days later the winner(s) is (are) announced.

I was one of the winners some lucky Monday earlier last year, so I never expected to win again! But I did 😀

Prizes taking the long way around

Because I live in Spain, and Kippers Hobby is a Dutch company, I gave them my son’s address in the Netherlands. And nothing to the detriment of my son… but he isn’t the fastest with sending things to Spain 😛 . So it took a while before I even heard that my prize had arrived at my son’s, and then I had to wait for the envelope to be sent to me.

That’s exactly how it went. And on the 4th of February she, and the envelope, arrived in Spain. Yesss, now I would finally get to see what I’d won!

A little while longer

But first my friend became ill. She brought home a cold and the flu… which made me decide to stay away for a while until she would feel better (and selfishly enough, I didn’t want to catch her bad cough… sorry, not sorry 😛 ).

Anyway, the day of me finally receiving my prize came this week, on the 21st of February. Yeeeaaah… I’ve got my mail, after a looooong wait. And it traveled many miles from where it started its journey.

What did I win?

After such a long time I had totally forgotten what the prize was and neither could I remember when the Facebook video had aired. So I searched and eventually found it. It was on December 10th. Wow, that really was a long time. Two and a half months ago!

As the saying goes ‘Good things come to those that wait‘, and that’s true. My prize was good and worth the wait haha.

What did I win? A set of Marianne Design ‘Winter World’ 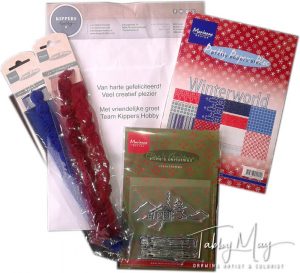 products: a clear stamp set, two packages of flower ribbons and a set of lovely blue and red design paper!

So here’s a belated ‘thank you very much’ to EvelinesDesign for sending me this lovely set (after a long detour).

Well, that was the part ‘you win some’. 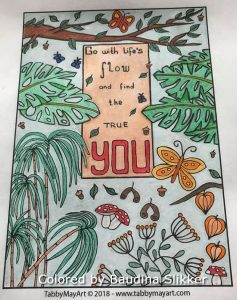 On January 21st I posted a blog about the Costa Women ‘Make it happen’ planner 2019, and my accompanying contest to win one’s own copy of it. To join the contest a participant had to colorize a drawing made by yours truly.

As it turned out there was only one contestant who’d sent in her colored version of my drawing. It was a funny feeling seeing my drawing colored by someone else. But like my good friend Michelle M. Johnson always says: it’s a wonderful experience to see your own creativity combined with someone else’s!

So I’m looking forward to experiencing that more often. About which I will write some other time.

Well, the ‘give some’ part, the 2019 planner, had to be shipped off all the way to… Canada! When Ali Meehan (Costa Women’s initiator and creator of the planner) gave me my own copy of the planner and one extra copy to give away, I was actually quite sure that it would be sent to someone in the Netherlands. So what did I do?

On my latest visit to my children, last December, I left that copy with my daughter. That way it would be a lot faster and cheaper to send… assuming that the winner would be Dutch and living in the Netherlands. Hahahaha, things appeared to turn out quite differently.

I never expected it would have to go to Canada! Which, by the way, made it extra special, because an English planner of Spanish origin was going from the Netherlands to a Dutch woman living in Canada… It certainly appeals to my imagination! 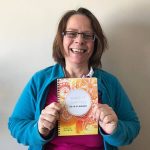 So my dear daughter (who’s a lot faster than her brother hahaha), has sent it away on its journey over the great pond, all the way to Canada. And then yet another wait began. Which ended after about three weeks, on the same day that I finally received my prize.

That day the lucky winner of the planner, Baudina, let me know that her prize had arrived as well. Both prizes arrived simultaneously… whoop whoop!

<= And she was kind enough to send me a picture of her holding her planner! Thanks Baudina!

So the circle has now been completed.

Like I said, you win some, you give some. And winning prizes is always a lovely thing to experience, right?

Thanks again for reading! *High five*

Liked this blog? Then remember to share, by using the share buttons below. And as always: your comments are very welcome!