Fly, fly away… on oma’s airplane

Here’s the blogpost I’ve promised you in the previous ones!

Almost two years ago, a very important event took place in our lives… Someone so very special and so very precious was expected! After months of waiting, and anticipating who this person would be, because we obviously didn’t know beforehand, it finally turned out to be a ‘he’.

And ‘he’ was given the name of Dex. This very special, precious little person was our daughter’s and her partner’s firstborn… their son, our first grandson!

He’s such a funny little guy! He’ll be two years old in just a couple of days from now and he starts talking and singing, running and jumping and when he giggles my heart melts. He’s the joy of the family and everybody loves him ♡♥♡♥♡

Too far for a cuddle

The downside of his arrival in our lives, is that my husband and I live in Southern Spain. Our daughter and her family live in the Netherlands, so that’s 2346 kilometers (1457 miles) apart from each other! This means that I feel the need to fly out several times a year to see them, so that’s what I do.

Now that he’s becoming more aware of the people around him, recognizing family members and knowing (and saying) their names, he’s also ready to receive cards every now and then.

And that’s what this blog post is about. I’ve made a card especially for Dex. Not for a special occasion, but just to let him know that I’m thinking of him, even though I’m mostly far away. Of course we regularly make video calls where we are able to see each other and have our little conversations ♥.

Since I’m his only grandmother (‘oma’ in Dutch 😉 ) that has to take an airplane to get to see him, I’ve made him a special airplane card. With wobbly eyes! (He’s a fan of the Disney Cars movies, and all the cars have eyes… so I figured that he would like airplanes with eyes too 😀 ).

Here it is, my airplane card 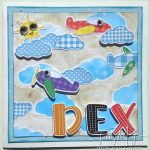 It’s already been over a month that I made this card, so I’m not sure if I remember what exactly I’ve done, but I’ll give it a shot. I do remember that I’ve used design paper from a block that I’ve bought at Aldi or Lidl. In that block was a sheet with letters, and a sheet with cute airplanes, clouds and suns.

So I cut out the letters of Dex’ name and a couple of clouds, airplanes and a sun. I used one of the clouds for its contour and drew the cloud contour with a white Gelly Roll Glaze 3D gel pen. For the inside of the drawn clouds I used pastel blue Ecoline. The background around the clouds was colored with Gansai Tambi Starry Colors, for the nice shimmering, sunlike glow.

I glued all the cut out pieces to the background, not only using glue but also double sided foam tape, for some extra dimension. And then I added the wobbly eyes. To finish the front of the card, I matted it on a piece of design paper (also from one of the discounters, Aldi or Lidl) and put that onto a basic piece of cardstock that was cut and folded to the right size.

Cute stamps on the inside

For the inside I’ve used the stamps of the Studio Light ‘Diny’s Signature Collection’. After stamping them on 185 grs. WaterArt paper, I’ve colored them with Zig Clean Color brush pens and cut them out. 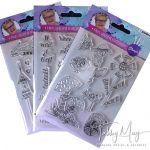 Something new on the back

Since I’ve found the stamp and die sets from a new Dutch brand ‘CarlijnDesign‘, it’s a must for me to add something to the back of each card I make. Before I’ve had these stamps I just used to write ‘Tabby May Art [year]’, which isn’t a lot of fun nor very creative. But nowadays I add these cute stamps to give the backs of my cards just that little extra.

On this card I’ve also used CarlijnDesign stamps, as well as my own signature stamp. This was one of the first cards on which I tried something different for the back, and I’m not quite satisfied with the outcome, although it’s better than having nothing on the back 😉

In my opinion my signature stamp is too large, so I’m planning to order a new one, just a little smaller. Well, like I said, it was one of the first times I’ve tried to make something a bit more creative of a backside and ever since they’ve gotten a lot better!

If you’d like to see all the pictures I’ve made of this cute card, including some close-ups, just click the link => here to go to the photo album.

For now I’ll end this blogpost with a picture my daughter has sent me of Dex, ‘reading’ my card ♥. I can hardly wait to cuddle this little fellow again… 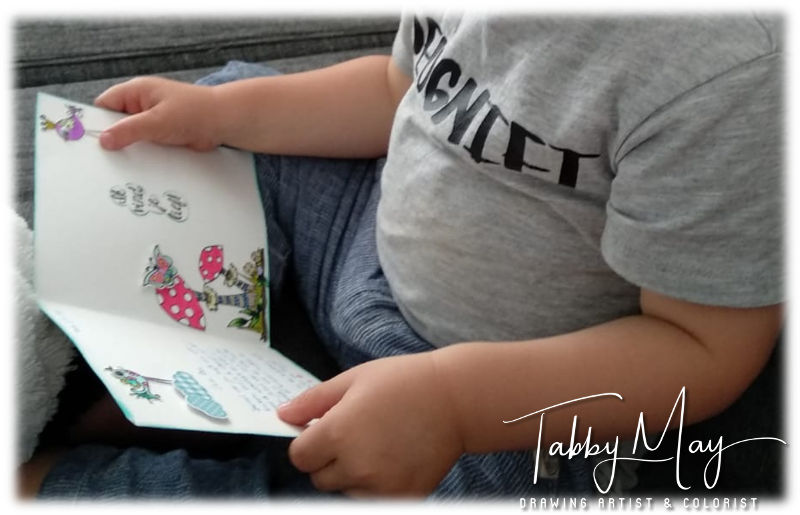 Thanks for visiting my website and reading my blog. If you like what I’m doing and want to see more, please share and like my posts on social media, say by using the buttons below 😉