The One and Only Coloring Calendar 2017 (BBNC) 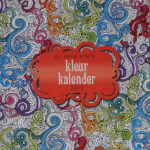 Every month a drawing to color

BBNC Publishers sent me a copy to review of The One and Only Coloring Calendar 2017. Many thanks! It’s quite a large monthly calendar, 30 x 30 cm, with every day enough space to list appointments etc.

Every month has its own design to colorize according to one’s own taste and style. As an extra there’s also a design for September till December 2016. So in total there are thirteen very divers designs.

Particularly because of the size of the designs, I’ve chosen to only colorize two designs this time. And since I really want to use the coloring calendar in 2017, I’ve started at the beginning. Well, nearly at the beginning.

Because I’ve skipped the first design, for September till December. I seldomly hang up a new calendar before the new year has begun. And at this moment there’s still a lovely coloring calendar hanging on the wall, so that will stay there until the year is really over and the new one starts!

Video of the coloring calendar

As usual I’ve made a short video of the content. This way you can see for yourself what kinds of designs are in the coloring calendar for 2017. 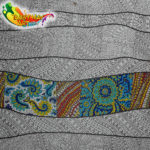 The first design was right a way kind of a challenge. I’ve seriously considered whether it might be wise to start with February, since this is full of such small details! At first I had to take a good look how this drawing is constructed. So I’ve started with looking for patterns. What patterns are repetitious?

And pretty soon I discovered that it did contain repeating patterns. To start with I had to think of the material I wanted to use. That wasn’t very hard to think of, because something other than fineliners would get me frustrated very soon. These are such small details! So I chose for the Stabilo 88 fineliners.

Then I had to ‘think’ of the colors. Actually I never really ‘think’ about colors, I pick them randomly by intuition. Don’t ask me why, but I’ve started out with five colors: yellow, dark blue, light blue, mint green and light grey. The first part that I started to colorize was different from the repeating pattern.

I noticed ten of those different parts in the whole drawing. So I decided to colorize all of them with these five colors. When I started with the pattern I picked colors intuitively as usual and that was real easy. I took two from the first selection, yellow and light grey, and added a dark red.

With these three I continued coloring the pattern and with the total of six colors I’ve done the whole design, bit by bit, piece by piece. I’ve also deliberately chosen to leave pieces white, so that in the stir of this design a little ‘air’ would be able to flow in.

Some help of the Stabilo 68 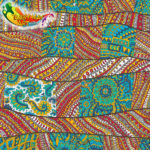 For the pattern strips that go uninterrupted from left to right I’ve taken the Stabilo 68 pens to help me out. Luckily I’ve picked exactly the right colors that were also in the Stabilo 68 set! For the larger areas it was a lot easier to work with the 68 pens instead of the fineliners. A lot faster too.

In between I checked whether the fineliners or the pens did bleed through to the back of the page, but that was not the case. It is visible that there has been colored on the other side of the page, but it never led to real bleed-through.

Despite that this was quite a tough design in my opinion, I did have a lot of fun with coloring it. When I look at it, now that it’s finished, it reminds me of the patterns in Norwegian sweaters. I can imagine that similar patterns can be used for knitting. And the longer I watch, the more beautiful it becomes to me!

When I finished the first design, I picked a second one. I took a good look at the whole coloring calendar, but decided to continue coloring in the right order. If I only get time in February to continue colorizing it, than at least it can hang on the wall with a nicely colored February design (that is when I’m not working on it hahaha).

Luckily February had a lovely flower mandala, because after the tiny detail stuff of January I kind of needed something like that. 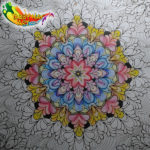 The material that I’ve picked were the Neocolor II crayons by Caran d’Ache. These are water-soluble oil and wax based pastels. I had never done a complete design with them, specially not in this size, so it was kind of a surprise how it would go and what I would think of it. But I can tell you that I love to work with this stuff!

I’ve got a tin of thirty colors, so I’ve just picked colors randomly again. Just like with watercolor pencils I’ve colored a small area, but didn’t totally cover it with pastel. Sometimes I even only drew a small edge.

With the Caran d’Ache water brush I then added water to dilute the pastel and spread it wherever I wanted it. And that worked so nice! The garland was colorized this way, bit by bit, nicely inside the lines. But when that was done, I had to do the background. 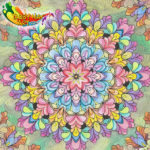 This was a challenge. I didn’t feel like coloring every single stripe, so therefore I took four shades of green and colored all the different areas with these four colors. Then I took the water brush and blended the colors.

I wanted the garland to stand out a bit more, so to achieve that I had to dim the green and make it less bright. I did that by coloring all the green again with the white Neocolor II. Just covered all the green with a thin layer of white and then blended it with the green by using the water brush.

Back in the days I painted furniture, I liked refurbishing, and this reminded me of that. A bit of white washing haha. And it worked! I got the intented effect and I am delighted by how this February design turned out. Too bad February only lasts 28 days.

I think this is a really nice coloring calendar, although it contains a couple of not so easy designs (in my opinion). But I definitely will color them all! The paper is thick, white and works very nice to color.

All pictures from this review, including a couple more W.I.P. pics, can be seen here, or through the Photo gallery in the top menu.