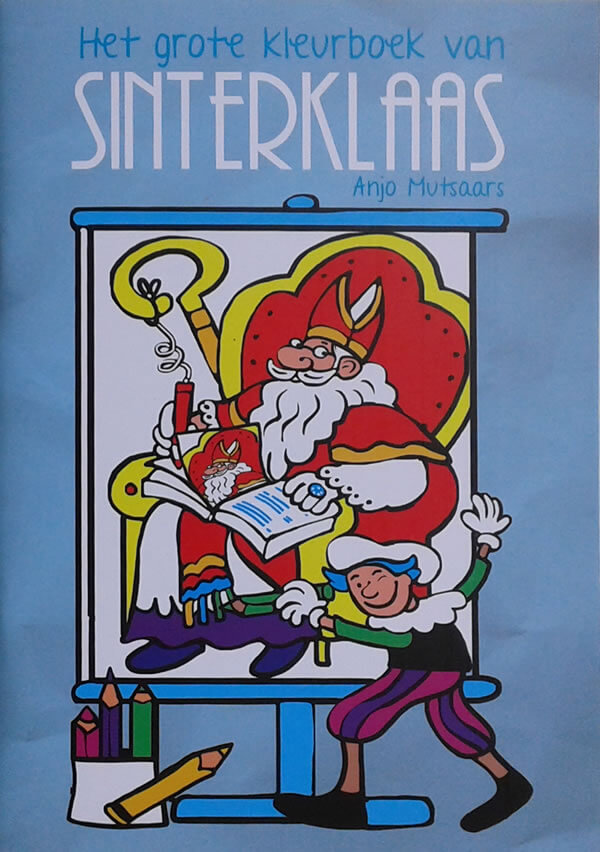 In 2016, through Kleuren voor Volwassenen, I received this Saint Nicholas (‘Sinterklaas’ in Dutch) children’s coloring book from publisher BBNC.

My initial feeling was ‘what do I have to do with this???’ It’s a children’s coloring book and what I do is ‘coloring for adults’! But okay, under the guise of ‘never look a gift horse in the mouth’ I did start and came to the conclusion…

No, I’ll save that conclusion for the end. I’ve started coloring in it. Period.

This book is actually a story book in which a story is being told by means of cute drawings. It tells about Saint Nicholas living in Spain, together with his helpers, and they’re preparing presents for all the children in The Netherlands.

The drawings are specifically attractive for Dutch people, young and old, as they will definitely recognize a lot of familiar things. And when you start coloring, the drawings really come to life and trigger everyone’s imagination. It feels like you’re being drawn into the story. Very nice!

The first colored drawing of this review is a picture of Saint Nicholas waking up and looking out of the window of his Spanish house. I gave the house the color of the first house we moved into in Spain, early 2013.

In this drawing I’ve first worked with Neocolor II oil-wax based pastel crayons by Caran d’Ache. These are water-soluble pastel crayons.

Really nice to work with, minor detail was that the paper of this book was not really suitable for these crayons. The paper absorbed the minimal amount of water that I used, making the paper feel very rough and textured. 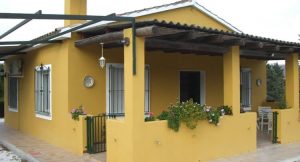 For the next drawing I was kind of stubborn, so I used the Neocolor II crayons again, and again using water, but this time I also added some color with the Stabilo 68 pens.

The blue sky in the background has become a bit stained because of the paper absorbing the water, but I don’t think it looks too bad. 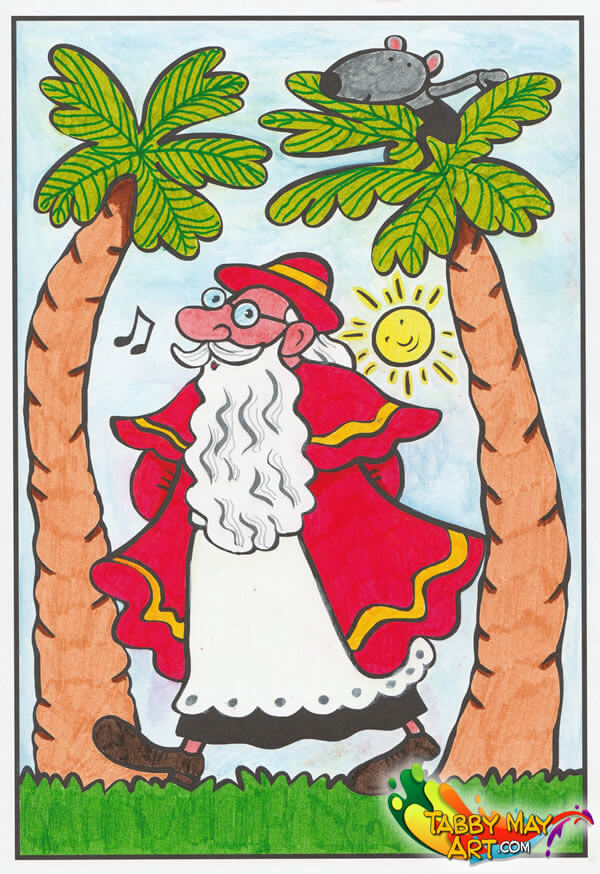 One thing I find very funny in this drawing, is that Saint Nicholas didn’t wear his mitre this time. Instead he wears a funny hat, suiting his robe.

And also that he starts whistling out of pure joy, all the while walking in between palm trees, on the green grass, with the warm Spanish sun high in the blue sky… I do recognize that!

Saint Nicholas and the Big Book 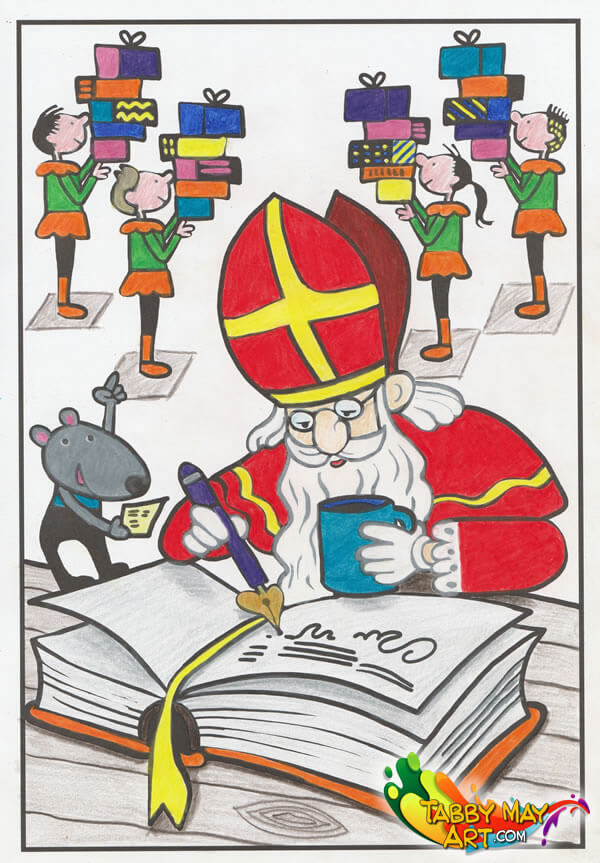 The last drawing of this review was actually the first one that I did color for this review. In fact, it was the first EVER Saint Nicholas coloring sheet that I’ve colored in my life! And I really enjoyed it!

For this drawing I’ve used the Caran d’Ache Pablo pencils. I’ve got a tin with twelve shades, to discover what I think of these pencils. I hadn’t really used them yet, but I must say that I really liked the way they colored in this coloring book.

The pigment attached really well onto the paper, which made the coloring almost feel effortless.

So, I’ve reached the part where I come to a conclusion. Despite my initial second thoughts, I must say that I really liked this coloring book. What I like in particular, is that the paper is quite thick. Specifically for children that is a great advantage.

They often aren’t very subtle in the way they handle a pencil, so in this book it’s no problem when they press a bit harder on their pencils. The paper is sturdy enough and will not immediately start to wrinkle.

Because of the paper weight it’s also no problem to use felt-tip or other pens, without too much bleed through on the back of the pages. Although the paper can absorb a bit too much of the fluid from pens, which can result in stains. Well, that might not be too important for children, in contrast to a perfectionist adult like me 🙂

A little explanation on the Dutch ‘Sinterklaas’ tradition

Personally, I think this is a super cute ‘shoe present’ for children. In case you don’t know what a ‘shoe present’ is: every child in the Netherlands may ‘set their shoe’ in the days before the holiday of Saint Nicholas on Dec. 5th. Shoes must be set preferably in front of a fireplace, or something the like, and always in the evening.

And there must be a treat, e.g. a carrot, in the shoe for the Saint’s horse, or a drawing or crafted gift for Saint Nicholas and his helpers (the latter are traditionally black and are all called ‘zwarte Piet’ [black Pete], which is starting to become quite controversial in the Netherlands, but that’s a political discussion in which I don’t participate!).

The young children (usually until the age of 8) believe that Saint Nicholas is riding the rooftops during the night, throwing presents for them in chimneys, filling their shoes and taking their drawings and gifts in return. When the children wake up in the morning, they find small gifts in their shoes. And often mandarins, candy and/or peppernut cookies! And they then loudly yell ‘Thank you Saint Nicholas’ 😀

Well, this coloring book fits perfectly in this tradition as a shoe present. And while coloring the children can anticipate on the arrival of Saint Nicholas, who’s on his way all the way from Spain to celebrate his birthday on Dec. 5th!

So fathers, mothers, grandpa’s and grandma’s, and of course Saint Nicholas and Zwarte Piet, please order rapidly! The sooner this lovely children’s Saint Nicholas coloring book will be in all the little shoes! It’s available at Bol.com for only € 6,99 (excl. shipping and as of Nov. 1st 2020 only for the Netherlands and Belgium)!

Part of this review was first posted on November 16th 2016.

Disclosure: This review contains products that I received from a publisher or company. This however does not reflect on my opinion in any way. I am not affiliated with Bol.com. Also note my Disclosure Promos page!