The Ultimate Chalkboard Coloring Book review (and some controversial talk) 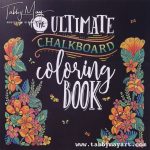 Click here to go to the ‘Tabby Reads‘-podcast video in which I read this blog to you, in case you’d rather listen to it while watching some nice visuals.

It has been part of my coloring book collection since March 2017. I’ve brought it with me from one of my trips to the Netherlands back then. I just never took the time to color in it. Until July 2020, when I was looking for a nice sentiment to color, that would match a blog post with part 2 of the love story of me and my husband (here’s our complete story, which is well worth to read, or watch the video).

That’s when I dug up this book again, and colored a first page with my new Faber-Castell Black Edition pencils. I used that page for the review of those pencils, but today I’ll talk about the book itself! (And I’ll also say a couple of possibly controversial things. Things I need to get off my chest.)

As usual, let’s take a look inside! 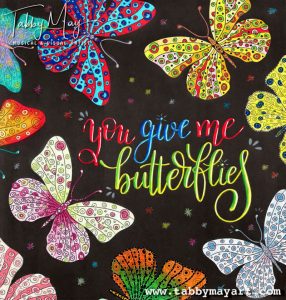 Okay, let’s start off with the page I already did earlier. The paper isn’t very thick, but thick enough for several kinds of materials. It has a pleasant toothing to be able to comfortably color with pencils.

Blending was easy and layering, which I’m not a fan of as you may recall, was very easy to do. Of course I’ve only used the FC Black Edition pencils, so I don’t know how other brands perform in this book. To add a little extra I’ve used a few Posca pens. For example to draw the black lines on the orange/green butterfly at the bottom, and to add some highlights. 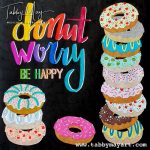 For the second page, I’ve used a lot more materials. I wanted it to look very sweet. And I also wanted these donuts to look like they were covered in sugar. So therefore I’ve used Spectrum Noir Sparkle pens. To add a silver icing to one donut and silver sprinkles on another, I’ve used a Faber-Castell silver metallic Pitt Artist pen.

I’m not particularly fond of donuts, it’s very rare that I eat them, but seeing these donuts come ‘to life’… It made me wanting to take a bite from all of them. Especially the pink one with the silver sprinkles and the chocolate brown one… ugh, mouthwatering!

In the corresponding photo album that I’ve made, you can see more detailed pictures of the donuts on this coloring page. (Taking a peek there is at your own risk… You might want to eat a stack of donuts after that ? ). 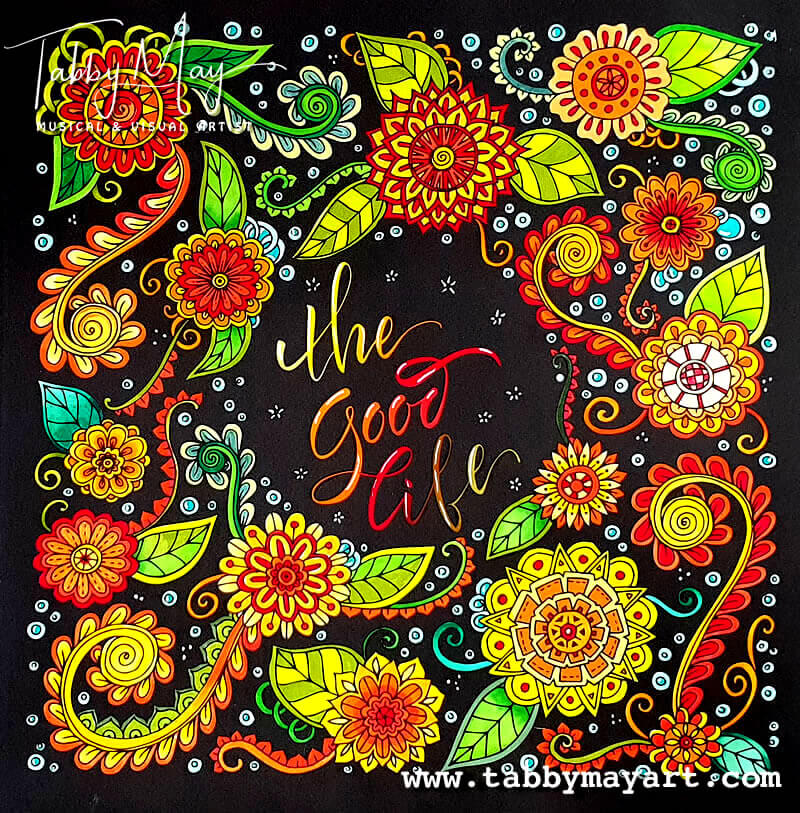 My third page in this book is colored with Tombow ABT Dual Brush pens. It contains the sentiment ‘the good life’. And this particular sentiment really made me think about the situation the world is in right now. Although life for me and my husband isn’t bad, we do notice that the world is changing rapidly.

And it’s changing in a direction that is at the least troublesome. The good life we knew, with the freedom we had (at least in our western world), seems to be something we’ll be longing for in the near future, hoping for it to return.

Although my website is not a place where I want to dive deep into what I think about this whole Corona crisis, I do want to urge you and everyone reading this, to stay away from fear. Fear that’s being installed in people, by propaganda from governments and mainstream media. Fear of a virus that isn’t as harmful as they thought at the beginning, fear of touching and hugging each other… What’s happening right now is taking away the freedom we had, and they slowly take away our humanity.

Well, now that I’ve started, let me tell you what I think about this matter. We are in essence mammals with a need for touch, shaking hands, hugging, a hand on a shoulder, a pat on the back… Normal, essential, human behavior is now forbidden. We are forced to keep distance and to wear mandatory face masks outside. At least here in Spain and in many other countries. Face masks that are proven unhealthy (you inhale your own exhaled gases back in, which is bad for your health and your immune system!) and that prevent seeing the expression on people’s faces clearly.

These things worry me. And I’ve seen and read enough to no longer blindly trust what governments tell us. We need to inform ourselves and find information outside the mainstream media, which are full of propaganda. The former GDR (German Democratic Republic) would’ve been proud of what is going on in Europe right now. Power hungry men trying to subdue the population, using fear, and threats of heavy fines.

So, the good life… oh we’ve had a good life so far, but I really do hope that people will wake up from the mass hypnosis that has been induced by the WHO and Big Pharma. It has influenced the majority of the people, who truly believe the ‘virus’ narrative. Our good life is in danger, and if we don’t stand up for our rights, our freedom, freedom of speech and the normal constitutional freedom to go where, and do what, we want, we might lose it for a very long time!

Okay, I felt that I at least had to say something about it. I don’t want you to think that I’m only coloring and making videos, oblivious to what’s going on. Now you know that I do know, and that I do care. And I also know that some of my followers will not like the stance I take, but so be it.

Like I said, I’ve seen enough, in my lifetime and during these last seven months, and today I felt the urge to share my thoughts with you. Do with it what you will. At least I will be able to look at myself in the mirror when shit really hits the fan in the near future.

Stay healthy, but mainly: keep thinking, use your brain, your logic, and listen to your heart instead of the TV, radio, newspapers or highly censored social media!

Conclusion (about the book ?)

Even though it’s an older book, from 2017, it hasn’t lost its charm. It’s printed single sided, and all pages are perforated. This way you can easily take your colored pages out to put in a frame, or to use for other projects. The book contains 30 coloring pages and measures approximately 11.5″ x 11.5″ (29,4 x 29,2 cm).

As I said, the paper isn’t very thick, but thick enough to be able to work with a variety of different materials. I’ve used a water brush and acrylic Posca pens, which both gave no problems. Just don’t overdo it with water, to prevent the paper from getting all crumbly and bleeding through.

And this is where I’ll wrap this up. See you soon on the next!