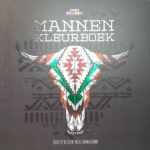 From Lantaarn Publishers I received the Men’s coloring book. First of all I’d like to thank Lantaarn. The size of the book is fairly large with its 29 x 29 cm. The paper isn’t very thick, but it’s firm enough and white.

All pages are printed single-sided. That is a great advantage, because it allows you to use all kinds of coloring materials. And when you’ve really made a piece of art, you can remove it from the book to frame and hang it on the wall.

When i received this book the cover immediately made me happy. I love ‘Southern rock’, and bull’s skulls. So I was sold right away! And even though I’m a woman, apparently this book addresses the masculine part of me 🙂

Below I’ll show a flip-through the book so you can see all 31 designs: 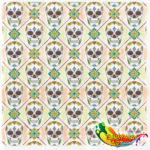 For the first design I picked a page with a lot of skulls. Don’t ask me why I chose this particular design, I really couldn’t tell you. I’ve started using the Faber-Castell Albrecht Dürer watercolor pencils and a Caran d’Ache water brush.

For the water brush I’ve used the one with the finest tip, because there were a lot of puny details in this one. Because I never use a lot of water when working with watercolor pencils, the paper didn’t show at all that it was touched by water.

For the background I’ve used pastel pencil by Stabilo, the CarbOthello. To smudge the pastel a bit I’ve used a cotton pad.

Eagle in the night

The next picture I chose, was on the first page. The complete picture attracted me. With that bird on the foreground and the forest and mountains behind it, beautiful. I started out with the bird’s beak and eyes and colored them with the Tombow Dual Brush pens. Then I’ve used the pastel pencils for the forest and a little bit on the mountains.

But with the mountains I first colored with the 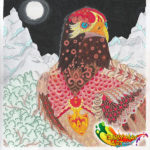 Tombows and after that I added shadows with the pastel pencils. I really liked working with the combination of the Tombow pens and the CarbOthello pencils. The pastel chalk attached really well on the paper too.

When I moved on with the bird, it became a stranger and stranger creature. Like it had come out of some myth or legend from far away countries, or maybe even from Avatar!

To give this design a bit of a mysterious atmosphere I decided to make the background black. A night sky with a full moon up above. For a moment I was in doubt whether to add a couple of stars, but in the end I decided against it.

Lionesque in the Men’s coloring book 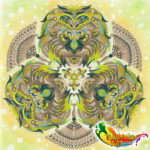 Finally I wanted to colorize a third design from the Men’s coloring book. I chose a drawing that in my opinion is a kind of mandala. But instead of being divided in eight or twelve parts, this one was just divided in three segments. Every segment contains a leonine head and a fan.

To color this design I’ve used the Caran d’Ache Luminance pencils. Beforehand I’ve made a selection of colors that I wanted to use. Mostly greens, supplemented with a couple of beige and ochre tones.

I’ve started with the two top fans and there I’ve been playing with gradients and shadows. As usual I mostly work without a predefined plan, so for the heads I’ve randomly picked the previously selected colors. All I do when I’m coloring is intuitively.

For the background I’ve worked with Faber-Castell Creative Studio pastel crayons. As I often do, I’ve scratched a bit chalk off of the crayons with a sharp knife, above a piece of paper. And then I applied the powder with a cotton pad on the background. After the background was finished I took a stencil and the electrical Derwent eraser and started erasing small circles.

While reviewing coloring books I always like to use a diversity of coloring materials. That way I can experience the paper at best. How does the paper react with the use of felt tip pens, markers, pastel or pencil.

And with this book it all worked pleasurable, I really like the paper. Lucky enough there are enough nice designs in this book for women as well, so I’ll probably color some more in a while.

Get your own copy?

Add. Nov. 2019: Unfortunately this book has been sold out.

All pictures from this review can be seen here, or through the Photo gallery in the top menu.