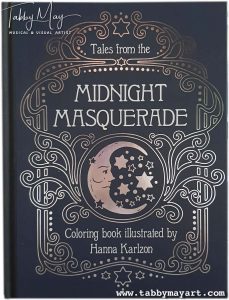 In this review I will take a deeper dive in Tales from the Midnight Masquerade by Hanna Karlzon. This was the first of two new books this year, and she has already announced a new one for Spring 2021! In another post I will also review her latest book, Guldkorn, which is only available in Sweden at the moment.

In April 2020 Hanna released the Swedish version of the book that I will review now. The Swedish name is Berättelser från Midnattsmaskeraden. Publisher Gibbs Smith came out with the English version last month, September 2020. And that’s the version I’ve purchased from Bookdepository.

About the content and the drawings, the publisher wrote the following: “You have been invited to a midnight masquerade at a grand mansion. Guests in splendid costumes dance and mingle in an atmosphere of music, lighted candles, lanterns, and many magical and mystical creatures.”

Hanna Karlzon herself wrote on Instagram, around June 2020: “The story in this book evolves around a masquerade that takes place in a castle and there is music, dancing, decorations and of course mysterious creatures and people dressed up in creative costumes. The party goes on until the break of dawn and you are all invited to join in!”

So, let’s take a look ourselves in the video below!

More info about Tales from the Midnight Masquerade

As you might have noticed, this book is slightly different than her previous books. There’s a notable size difference, since this book is smaller than what we were used to. It also contains less pages than her other books, so it’s thinner. Tales from the Midnight Masquerade contains 63 pages to color.

Hanna told her followers that this book is the first of a new series, since she has a new publisher. Hence the smaller size and less pages.The look and feel of the book is also different than her previous books, with the silver print on the cover. I must say that I really like the new look as well as the new size. 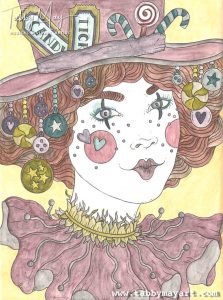 For this review I’ve tried to use a diversity of coloring materials. I started with a clown’s face. I’m not really a fan of clowns, but when I looked at this drawing, it made me think of Charlie and the Chocolate Factory. So to me it felt more like coloring a drawing of Willy Wonka!

On this page I mainly used Derwent Graphitint pencils and a water brush. The paper of the book isn’t white, but more like off-white or cream. Therefore I used the white Graphitint to get that extreme pale look.

Working with a water brush was no problem, although the paper isn’t as straight anymore as it was. But not in a way that it bothers me. It’s just visible that I’ve used water. To also test some coloring pencil, I’ve used a Marco Square Pastel C820 for the background. That worked very well. I used just a thin layer, but thanks to the perfect toothing of the paper that was all that was needed.

To try out some more materials, I took another page to do some more coloring.

For this second drawing, I started with Faber-Castell Pitt Artist pastel pencils. It had been quite a while that I used them, so it was nice to try them in this book. Working with pastel pencil was no problem. I haven’t even used a fixative afterwards, because the pastel isn’t going anywhere.

After the first layers of pastel pencil on the bows, leaves and blue flowers, I wanted to add more definition. So I took my Koh-I-Noor Polycolor pencils, which is also a set that I hadn’t used in a long time (if ever). I’m really amazed by the quality of the paper. I colored on top of the pastel pencil and could smoothly add at least five or six layers with the Polycolors!

I colored the dark green leaves with a Tombow ABT Dual Brush pen. Another great combination with this paper. For the hearts of the blue flowers I also used the Tombow pens, and I added some highlights with a white Signo Uni-Ball gel pen.

For the small flowers I chose to use a white Posca pen, and several Tombow pens. With the Posca I had to be careful to not color too often at the same spot, since little crumbs were appearing. Not sure if that was paper, but I assume it was. So coloring a complete page in Midnight Masquerade with Posca’s is not something I would recommend. They’re probably a bit too wet for the paper.

The last things to be colored, were the two large flowers on the left side of the page. This time I chose to color them completely with colored pencil. I took the silver one from the Polycolor set. I colored many layers, and building up the color went so smooth.

To add more definition I used a Tombow pen for shading, and the white gel pen for the thin lines in the petals. I used Tombows again for coloring the hearts of the flowers.

And then at last, the main character of this page: the ladybug. This little creature gave me an earworm by the way, because it made me think of an old song from Captain & Tennille. That song was called Ladybug, and it was a track on one of the first vinyl LPs I ever bought around 1979/1980. That album was called ‘Come in from the rain’ and to me it’s a classic album, well worth a listen. 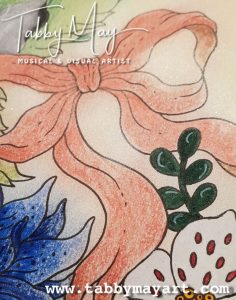 Well, everything but the background was now colored. And I wondered what to do with the background. If I should do something with it. But then I thought that a soft yellow pastel would be suitable, so I took my yellow pearlescent PanPastel and added a subtle shimmer to the page. As you can see in the picture.

After adding some highlights on the dark green leaves with the white gel pen, I felt that this page was ready.

So, now it’s time to give my conclusion about this book. I can be very short about it: if you like Hanna Karlzon’s drawing style, Tales from the Midnight Masquerade is a must have! The paper is fabulous and the drawings are similar to her previous books. And that’s what you buy them for, right?

As I mentioned at the beginning of this post, it’s available on Bookdepository.com. They send worldwide, and they don’t charge extra for shipping and handling.

And here’s the ladybug page in its entirity, to wrap this post up: 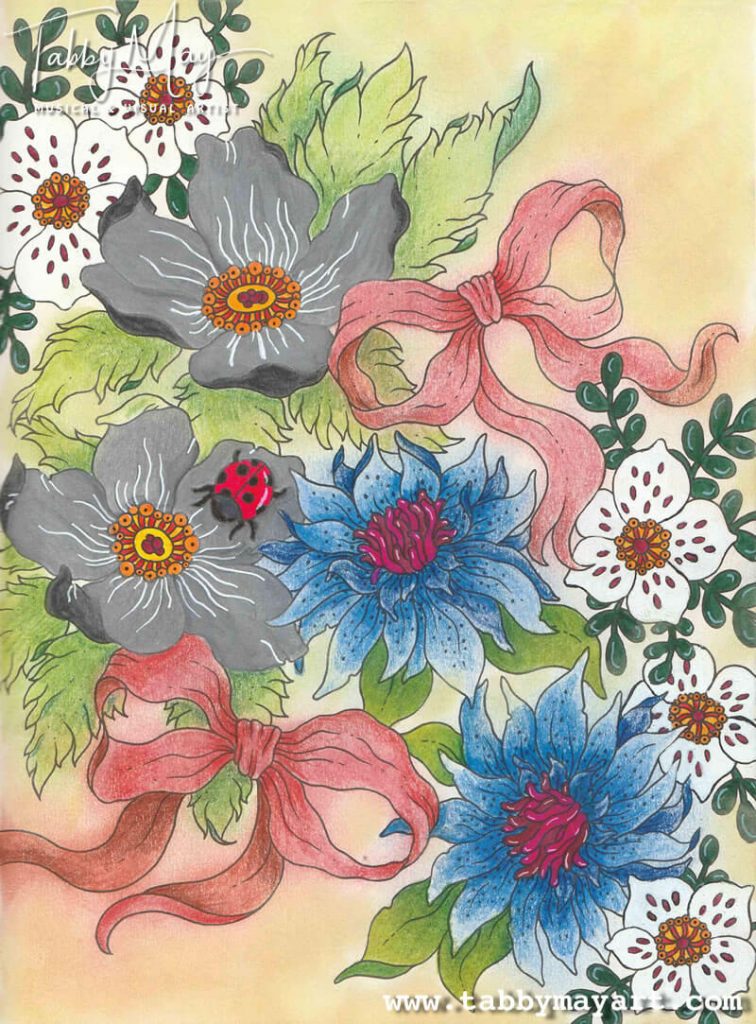 If you like this review, please share to your social media using the buttons below. And let me know in the comments what you think of this book!

Disclosure: I’ve purchased this coloring book myself and I’m not affiliated with Bookdepository nor with Hanna Karlzon. Also note my Disclosure Promos page!