The One and Only Coloring Christmas Cards (BBNC) 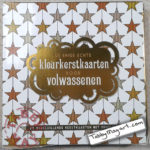 Recently BBNC Publishers sent me a box containing ‘The One and Only Coloring Christmas Cards for adults’. I’d like to thank BBNC very much for this set. The box contains twenty cheerful Christmas cards in the well known style of the ‘One and Only’ coloring books. It’s a very nice box with gold foil, just like the Fat Ladies Christmas cards I reviewed last month.

By the glamorous look of the box itself, I immediately had a Christmas feeling. Particularly when I took out the coloring Christmas cards and took a close look at every one of them. It was like opening a present! There are twenty cards with twenty matching white envelopes.

The front of the envelopes has a printed red framework in which you can write addresses. Coloring Christmas Cards by BBNC are, as I’ve learned from experience, made of firm, white paper. The back is printed with a Dutch text saying ‘Merry Christmas and a Happy New Year!’ and you can also colorize this text. And there’s enough space if you’d want to add your own text or Christmas wishes.

Video of the Coloring Christmas Cards

I’ve made a video for you in which I show you the box, the cards and the envelopes.

To be able to give a good description of how different materials react on the paper of the coloring Christmas cards, I’ve chosen three designs and colored them in. And I’m very pleased with the results, because the coloring of these cards was a joy!

The first design was an easy one, I thought. Nothing but stars to colorize. For this card I’ve used a couple of materials. At first I used a red Brushmarker to colorize randomly picked stars. The next round of stars was done with a green Promarker.

I tried hard to stay between the lines, which made coloring this one a lot less easy than I’d expected beforehand. And I actually wanted that no stars with the same color would end up next to one another. But I failed miserably on that one too hahaha. 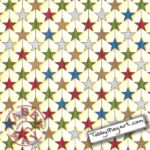 Because gold and/or silver are often used for Christmas, I’ve also used two metallic Sharpie markers. The card was already getting the Christmas ‘feel’ by now, but there were still ten uncolored stars. So I needed a fifth color. Intuitively I picked a blue glitter gel pen, hoping it would fit in the big picture. And it did, luckily.

When all stars were colored, I’ve given each of them a drop shadow with a dark yellow Derwent Coloursoft pencil. And after that I’ve also colored the background with a Derwent Coloursoft, but there I’ve used a light yellow.

Afterwards I’ve used a blender pencil on the parts that were colored with pencil. I felt that was the finishing touch it needed.

The next coloring Christmas card was colored with the Stabilo 88 fineliners. It was a very detailed design for which I even had to use my magnifying lamp on some parts. I was glad I had chosen the fineliners, because I fear it would’ve been a real challenge with colored pencil.

To add a bit more dynamics to the design I’ve decided to use a water brush on some parts. At first I colored a bit with a fineliner and then diluted it with a Koi water brush. The color palette I used was limited. It consisted only of red, orange, yellow, blue green, dark green and dark brown. 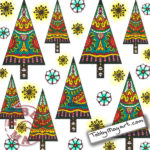 By using the water brush, which is very suitable for all water based and water-soluble coloring materials, I was able to add some extra variation through pastel tints and gradients. When using water sparingly, only just with a damp brush, these coloring Christmas cards are great for coloring with e.g. watercolor pencils.

But when you spill drops of water, the paper will sort of crumble and the surface gets damaged. So you’ve got to be careful! I think this card has turned out very cute and because of the colors I’ve picked it gets a bit of a Mexican feel to it. Isn’t that nice? 🙂

Lastly I had chosen a third card. Again this was a very detailed one, but I had to color this design, it was so cute! At first I colored Santa’s hat. Automatically I grabbed the red Stabilo 88 fineliner I had used on the previous card. But that was not what I had in mind. So after the hats I swapped the fineliners for the Derwent Inktense pencils.

With the Inktense pencils, as expected they were great as ever, I’ve colored the candlelight. The yellow stars, the candles and the blue snowflakes were done with Inktense too. This time I’ve used a different brand water brush, one by Caran d’Ache. In my opinion the Caran d’Ache water brushes are nicer to work with than the Koi.

But I solved this afterwards by covering the original lines on top of the pencil by using a Marvy Uchida fineliner. The lines were still vaguely visible, so that was very convenient. 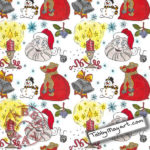 The snowmen, Santa’s gift bags with the beautifully designed trim, the streamers around the candlesticks and the juniper twigs were all colored with the Polychromos. I didn’t use a blender pencil afterwards. I really loved coloring with the Polychromos on this paper, as I did with the Inktense as well!

Too good to be… sent

Because of the details, this card took quite some time before I finished it. More time that I expected at least. But I like what is has become so much! My husband said “It would be a pity to send it” hahaha, so we’ll keep this one to ourselves. We’ll frame it and hang it on the wall during Christmas time 🙂

If you feel like wanting to start coloring these coloring Christmas cards yourself, then why don’t you just order them?! It’s half October already, before you know it they’ll have to be sent!

All pictures in this review plus a couple more can be found by clicking here, or via the Photo Gallery option in the top menu.

If you think this review is valuable, why not share it on your social media? It’s highly appreciated!