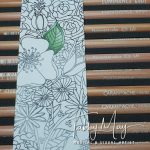 When I started coloring end of 2015, I did start with some really cheap pencils. It didn’t take me very long to discover that there is a complete world of colored pencils, with brands as Derwent, Koh-I-Noor, Spectrum Noir, Tombow…

But some brands are very prominent in that world. Like Faber-Castell with their Polychromos, Prismacolor with their Premier® Soft Core pencils, and then there is Caran d’Ache with the Luminance 6901® pencils.

The latter pencils are seen as high end artist pencils, but you’d be surprised to know how many hobby colorists use them in coloring books! 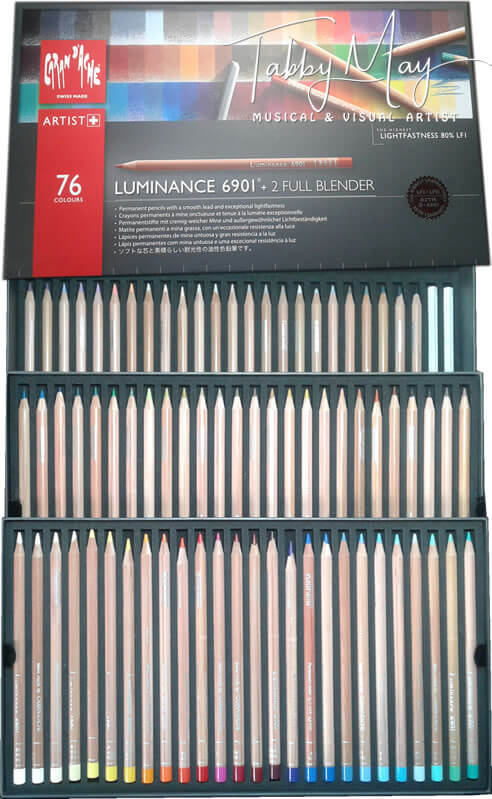 On their website Caran d’Ache tell us a little bit more about why these pencils are high end pencils and what makes them so special!

They start off with the statement that the “Luminance 6901® (is) the most lightfast permanent colour pencil ever designed“. Wow, that’s quite a bold statement. But if you read on, you know why this lightfastness is so important. The Luminance pencils “are designed for works intended for exhibition, collection and museum purposes“.

“The extreme ligthfastness” is tested and according to Caran d’Ache “confirmed by the most rigorous tests, earning Luminance 6901 top results and international ASTM D-6901 certification“. Aha! That last remark explains what I was wondering about:

Well, here’s the answer: ASTM D 6901-15 is the number of the standard with the ASTM International (an international standards organization that develops and publishes voluntary consensus technical standards) which, in short, “establishes quality requirements for composition, performance, and labeling of artists’ colored pencils.”

So Caran d’Ache prides itself in their compliance to this international standard with their Luminance pencils. And rightfully so, in my humble opinion.

Pretty soon after I started, I decided that I needed better pencils than the ones I was coloring with. (And trust me, that was a total TRUTH!) So in January 2016, I happened to run into a sale where Faber-Castell Polychromos (120 pencils in a wooden box, no less!) were sold for a lower price than I had seen them before. This was a no-brainer, so I ordered them.

I just didn’t realize yet that this meant that I was infected with a very special virus… the one that causes people to collect more colored pencils than they will ever be able to use.

I plead guilty, I’m incurably infected ?. No masks or vaccinations needed by the way, it’s pretty harmless (physically; only thing suffering will be your bank account when you’re infected too ?).

Not long after I purchased the FC Polychromos, I also found the 150 Prismacolors set for a fair price. Yeah! In the meantime I had heard so many good things about the Caran d’Ache Luminance 6901® pencils, that I was eager to add those to my growing collection. But they are expensive. As in REALLY expensive.

Luck was on my side when someone in an online coloring group had to stop coloring because of health issues. I felt so sorry for them, but on the other hand I was so happy to be able to get my hands on the 76 Luminance set without having to pay a fortune!

I must admit that I haven’t used them a lot ever since, but that is mainly because these pencils need attention when you’re using them. They perform best when coloring layer upon layer, to build up the colors. I’m not that patient haha, I love saturated colors, especially laid in one stroke… bam!

But when you color that way with these pencils, you’ll need to sharpen them a lot. These leads are very soft and creamy, and it feels as if I’d be abusing them when I would use them like that. So they were patiently waiting in their box for me to find more patience ?.

Coloring with the new colors

And then the news got out that Caran d’Ache would release new colors for the Luminance! OMG… my virus infection started roaring immediately! MUST HAVE!!

So finally the day came last month, when I found them for an affordable price in the Netherlands. All twenty four new colors! One set of twenty in a box called ‘Portrait Assortment’ and four single colors.

Not long after I ordered them, they arrived in our mailbox in Spain… oh the joy!

I ordered them from a firm called ‘Your Colour Creations‘ and they sent a colorable bookmark as a gift. Very nice, because that was the perfect little project to use my new pencils on. Which I did. I only used the 24 new colors. And they were as smooth and creamy as the older ones.

This time I was patient and I used several layers to build up the colors, which gives your work much more depth and definition. So that was well worth the effort. And gosh, these pencils are truly a delight to color with! Beside that, it’s nice to know that the colors on this bookmark will last for at least hundred years… *wink* 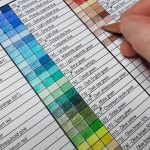 Into detail about the new colors

Of course I had to update my color chart with the new colors. One question came up when I was swatching the colors for the color chart: did I really miss these new colors? Are they a necessary addition to the 76 colors that were already available?

Let’s dive into that!

A bit of the same goes for the new 533-Dark Cadmium Orange (MIT). It’s a brighter, slightly darker orange that fills a gap between the existing oranges and reds. Going to the pink shades, there are the new colors 068-Herculanum Red, 583-Violet Pink and 094-Hibiscus Pink. I’m fond of all three of them! I feel these were really missing colors in the palette.

The next one is a red, 580-Anthraquinone Carmine. It’s slightly darker than 070-Scarlet and tends more to a dark pink like shade than a red, in my opinion. Although it’s definitely a different color, I’m not sure if I couldn’t do without it.

Then we have 115-Quinacridone Purple, which looks a bit like a darker toned magenta. It’s such a bright color, right between the pinks and purples, I love this color!

Going to the blues, we’ve got the new 135-Bleu de Nimes, a bluish purple-y color, 639-Dark Indigo which is a very dark blue, 649-Indanthrone Blue, another beautiful dark blue color and 140-Ultramarine, a very bright cold blue. All of these blues are great additions to the total palette, and totally different than any blue shades that were already in the 76 set!

We’ve had twelve new colors thus far, so let’s continue with the second half. There we have a new color that is my absolute favorite of all 24: 671-Chrysocolla Blue. It’s brighter than the 171-Turquoise Blue, and it’s just one of those colors that gives me a happy, even festive feeling.

Moving on to the greens we have 713-Middle Verdigris, which is what the name already reveals: a grayish green, 719-Dark Phthalocyanine Green and 212-Chromium Oxyde Green. As with the new blue shades, these greens are a wonderful addition. One wonders how we could have done without these!

A color that doesn’t add very much, in my opinion, is 044-Terracotta. To me it’s a lot like 876-Burnt Ochre 50%, so I could’ve done without it. 066-Natural Russet on the other hand does add to the whole. With a slightly darker tone than the other reddish browns it’s a great one to add.

We’re nearing the end of the new colors but not before we’ve talked about the new flesh colors, which were really missing in the old palette! Finally we’ve now got beautiful skin tones with 542-Light Flesh 10%, 741-Dark Flesh 5%, 745-Dark Flesh 40% and 748-Dark flesh.

Obviously they belong in a set called ‘Portrait Assortment’, and they definitely belong in the complete set of 100. So I’m very happy that Caran d’Ache added these!

Second-last there is another reddish brown, the 575-Carmine Lake. It’s a tiny bit more reddish than 069-Burnt Sienna, but to me it’s not a color that I would’ve missed if it wasn’t added.

So there we are, we’ve reached the last color of the 24 new additions to the Luminance set and it’s 581-Pink White. It’s not white, and it’s not pink. It can be used as a very light skin tone, or for the whites of eyes, which is never really white. This color is perfect for that and definitely one that belongs in a Portrait pencil set!

So, overall I’m thrilled by the newly added colors. Some I could’ve done without, but some others are such a fantastic addition to the whole set. Now there’s no more need to use pencils from other brands (that don’t have the same ATSM standard as the Luminance), because you miss out on some greens or blues, or skin tones.

Compliments to Caran d’Ache for completing a set that already was wonderful with the existing 76 colors, but has grown to the mature set it is now with a 100 colors palette! Whoohoo!

Disclosure: I have no affiliation with Your Colour Creations nor Caran d’Ache. These colored pencils I’ve bought myself. Also note my Disclosure Promos page!

PrevPrevious:Speckled Egg, what took you so long?
Next:Pen 68 Brush by Stabilo… is it a GO or a NO?Next
0 0 votes
Article Rating
Subscribe
Login
0 Comments
Inline Feedbacks
View all comments
wpDiscuz
0
0
Would love your thoughts, please comment.x
()
x
| Reply
X Close