A couple of days ago I received a new Amazon order: the new Stabilo Pen 68 Brush pens set of 24 colors. Yesss! I had already ordered a set of 20, but that set didn’t have all the colors. Stabilo has made some strange decisions with composing the sets (although, marketing wise maybe not so strange…). I’ll explain that later on.

The packaging tells us that the flexible brush tip gives thick lines with full pressure, thin lines with light pressure. This makes them theoretically very suitable for brush/hand lettering and according to Stabilo also for ‘comic, manga and hobby artists’.

Another thing that is specifically mentioned on the packaging is that these pens give ‘incredible aquarelle effects’. Well, let’s find out, shall we? 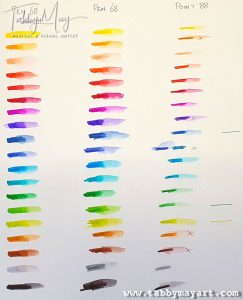 Comparing the colors with Pen 68 and Point 88

All the 19 colors have corresponding numbers with the other pen types. So the Brush pen ‘Purple’ has no. 19, and that goes for all three types, as you can also see in the picture above. Obviously the difference is in the thickness of the point. All 19 colors of the 68 Brush pens are exactly the same as the matching colors of the Pen 68.

With the Point 88 the numbers are the same, but there are a few differences in colors. This might be significant if you’re for instance coloring or drawing something and you want to use the fineliners as well as the other felt tip pens in the same colors. In the picture on the right you can see the swatch I’ve made of all 19 colors in all three pen types. If you look closer and compare the Point 88 colors (checked with an ‘x’) with the colors of the Pen 68’s, you can see the difference.

In the video that I’ve made in addition to this review you can see it even better.

The brush pens and what I think of them

I didn’t want to start this review jumping up and down for joy, so I tempered myself a bit. BUT… I’m absolutely super enthusiastic about these brush pens! They’re very wet, which makes them very suitable for blending colors and for watercoloring with them. In the video you can see how I used a water brush to get that watercolor effect. 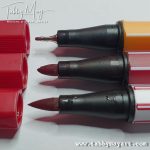 And that effect was all the more surprising to me, because I discovered that the choice of paper is very important! Let me explain that to you. I printed my new color chart on my regular 160 gsm smooth Navigator paper, which I usually use for my color charts. Following my own instructions on that chart, I colored one part saturated and then dragged the color with a water brush to the right, to get a gradient. At least that was the idea, but that didn’t work at all! I could barely get any color to drag!

Pick the right type of paper to get the best results!

So for the swatch I did in the video, I used Talens Ecoline print paper, which is specifically designed for using wet mediums like Ecoline, or watercolor! And this did miracles when I used the water brush on both the Stabilo Pen 68 Brush as well as the regular Pen 68. (It didn’t work that good with the Point 88. It’s not that it’s impossible to watercolor with these fineliner pens, but if you have the Pen 68 and/or the Pen 68 Brush pens, they are a way better choice for watercoloring!)

In the video I forgot to show how easily you can blend with them, sorry for that!

The brush tip of the Stabilo Pen 68 Brush is very nice an exactly how I prefer it: not too soft, not too sturdy. They’re truly wonderful to use for modern calligraphy or brush- and hand lettering. Not that I’m very good at that, but I do know how to draw up strokes and down strokes, as you can also see in the video. These pens are easy to use.

If you’re not a hand letterer but prefer to use these pens for coloring, they’re definitely worth your money! 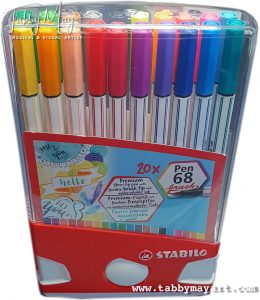 Talking about money and the different sets

Yeah, coming to this subject I do have a few comments to make! At the beginning of this review I already mentioned the weird choices Stabilo has made concerning the different sets. When I bought the 20 pens set, I assumed that I would get all 19 colors and one double.

To my surprise I received no doubles at all, there were twenty single colors: 15 normal colors and 5 neons. At that time I didn’t even know that there were 19 colors, I discovered that when I started doing some research to write a review about these pens. Still it didn’t make sense. How could I have received 20 different colors, while there are only 19 colors available???

I tried to dig a little deeper and found out that Stabilo has released wallets of 6, 8, 10, 12 and 24 colors. Added to that they released two metal boxes of respectively 15 and 25 colors, a box called ‘ColorParade’ of 20 (that’s the one I’ve got) and a blistercard of 3.

So now I was totally confused. Only 19 colors, and a metal box with 25 colors? With the Pen 68 there were a couple of doubles in the tin, so I assumed that would be the same for this large set. But still, why did I receive 20 different colors, while there should only be 19? 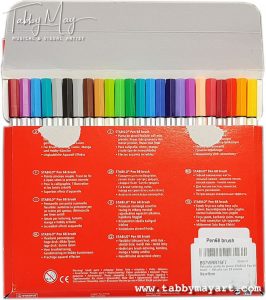 My search led me to Amazon. I found the set of 24 colors and I started reading the reviews (on both the Spanish and German Amazon). The answer to the riddle came from one lady who was very disappointed! She had ordered this 24 set, thinking that she would get ALL available colors, which would be 19 plus 5 neons. What she received was a set of 24 pens, of which 5 where double and no neons!

But heeeey… I had 5 neons in my 20 set! So now I knew that I didn’t have one color extra, but that there failed 4 colors to the total of 24! For some reason Stabilo doesn’t count the neons, but I know now for a fact that there are 24 different colors.

So when one buys a set of 24, you’d expect to get the complete set of ALL available pens. Well, not with Stabilo. And that’s what I meant, that it’s a weird decision, but for marketing reasons it might be profitable for them. Since I wanted the missing colors bad enough to buy the 24 set too… for 4 pens ?. And I can imagine that I’m not the only one being such a sucker ?.

These pens are really good and do exactly what they should. They are very affordable, especially compared to brush pens like the Tombow ABT Dual Brush pens. But… if you want to have all available colors, I recommend you buy the 20 set and find a store where they sell these pens open stock to get your hands on the last four missing colors.

For me here in Spain it’s not so easy to buy them open stock (haven’t seen these brush pens anywhere in shops yet). So I’m usually at the mercy of Amazon. Besides, I don’t mind having many doubles. They will be my travel pens, and the complete set will stay at home in my studio.

So I hope you found this review helpful. If you decide to go buy a set of these Stabilo Pen 68 Brush pens, let me know in the comments what you think of them!

Disclosure: I’ve bought all mentioned products myself. I am not affiliated with Stabilo nor Amazon. Also note my Disclosure Promos page!