When I started coloring I didn’t know anyone in the coloring and illustration world. Through surfing and visiting websites I suddenly discovered coloring sheets drawn by Sandy Wijsbeek on the Kleuren voor Volwassenen website (Coloring for Adults). 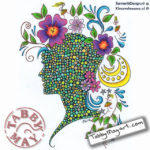 I was instantly enthusiastic and last February (2016) I colored my first design by Sandy Wijsbeek. Another thing I discovered, was that Sandy is a very approachable person, like so many others in the coloring world.

A cheerful, social type, who is a kindergarten teacher as well, beside her artistic work.

Furthermore, as can be read on her own website (which is only in Dutch), the last couple of years she has build this wonderful collaboration with Kirstin Rozema. Kirstin is a freelance author of a.o. children’s books.

Or ‘Tess en het geheim van het oude boek‘ (‘Tess and the secret of the old book’) for boys and girls between 10 and 12 years old. Last May Uitgeverij Boekscout (a Dutch publisher) released Kirtin and Sandy’s children’s book ‘Houd de dief!‘ (‘Stop the thief!’) Which caused some other developments.

Sandy came up with an original idea. She didn’t want to color the characters of the new book by herself and that’s why she drew a mandala. The idea was to let other colorists add the colors. So she put a call on Facebook to ask for colorists who wanted to help her by coloring her mandala.

And I was one of the respondents 🙂 I’ve colored two different versions of her mandala and both were used for the book!

This was such a nice collaboration, I’m secretly hoping for something like that to happen again.

Obviously I’ve bought this book myself as soon as it was released. And it’s now proudly standing in my new bookcase in my studio. 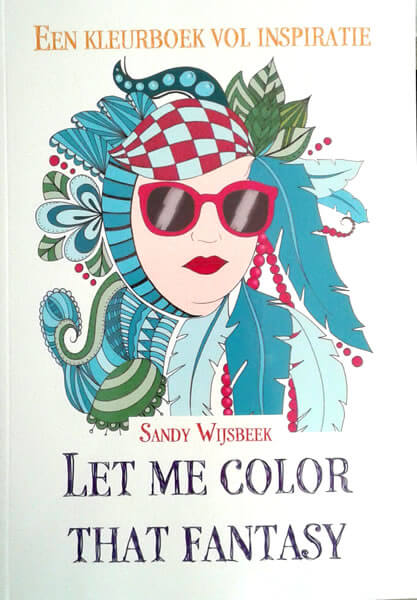 Let me color that fantasy

I almost forgot to tell that before ‘Houd de dief!’ was released, Sandy released her very own coloring book last April. It’s called ‘Let me color that fantasy’. A really nice coloring book full of surprising designs and it was the coloring book on which I wrote my very first review.

You can find this book at Boekscout.