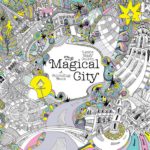 After seeing videos on Youtube and several colorings on Facebook, I just had to add this book to my collection. I could hardly wait to start coloring in it. I’m talking about ‘The Magical City’ by Lizzie Mary Cullen.

It’s a square book of 25 x 25 cm. It has 96 pages of medium weight white paper and is printed double-sided. Many of the designs merge into the binding, but I could fold it open enough to be able to draw right onto the edges. The cover is double folded on the front and back side and can also be colored.

Information on the back of the book:

Step inside The Magical City… Open your mind to the hidden wonder of urban landscapes across the world with this beautifully intricate colouring book.

From London to Luxor, follow cobbled pavements through winding streets, look up at skyscrapers soaring to the skies, and gaze over rooftops and dreaming spires. And as you colour and doodle your way through these illustrations, you’ll find hidden details emerge not only on the page but also in the world around you.

It’s also a book with hidden animals that you’ll find while coloring. On page 5 you’ll see what animals are hidden in the drawings. The answers on where to find them are in the back, with miniature drawings of every design, with extra information about what the drawings show (like city, street, building etc.).

When I bought this book I wasn’t even planning on reviewing it, so I just started somewhere with my then brand new colored pencils: the Derwent Coloursoft. The first design I chose was one with flowers and a building in Hyde Park, London UK.

Since I’ve been to London earlier this year I thought this drawing to be a good start. I’ve got no idea what building it represents, so I’ve just randomly picked some colors. 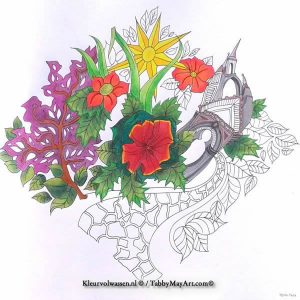 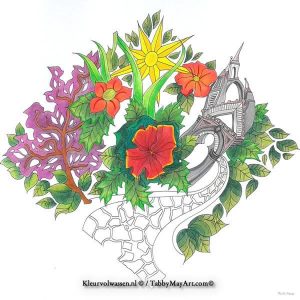 The Coloursoft pencils did very well on the paper. Blending was easy and the coloring went very smooth. Beforehand I had no idea what I wanted to do with this drawing nor which colors I would use, so I’ve colored the way I always do: I just color and see what happens. 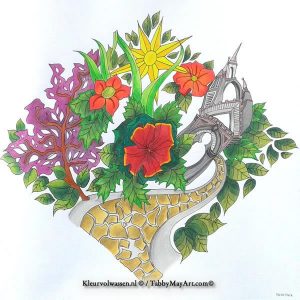 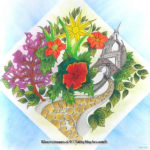 In the end the cobbled pavement looked a bit like ‘Yellow brick road’ from the Wizard of Oz. Which was very suitable, because I went to see the musical ‘Wicked’ in London, that tells the story of what happened previously, before all the events in that well known movie took off.

I felt that the end result was kind of boring, so I’ve made a frame using a piece of paper and some Faber-Castell Creative Studio soft pastel crayons. After that I felt this work was finished.

In the meantime, while Hyde Park was done, the plan came up to review the book. So I picked a new drawing to start coloring with Faber-Castell Polychromos and a couple of FC Albrecht Dürer pencils. I picked Sydney. Also because I’ve been there years ago.

And while I was coloring it, lots of memories and pictures popped up in my mind, which I partly used in this particular coloring work. 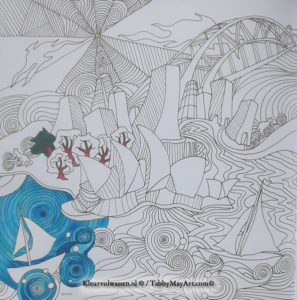 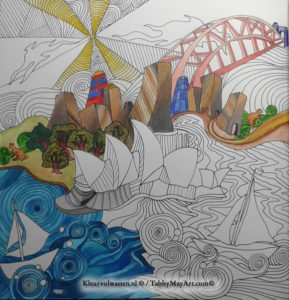 Near the Opera House is the oldest part of Sydney, the Rocks, where most buildings are yellowish brown because they’ve been made of limestone. So I’ve used those colors for most of the buildings in the drawing.

The water in front of the Opera House is the connection between the harbor of Circular Quay and the sea, so I’ve colored that water in sea colors. 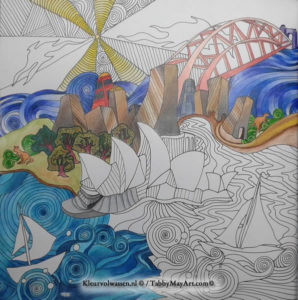 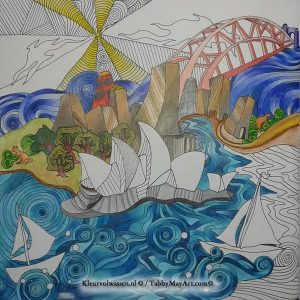 The water running below Harbour Bridge leads to Parramatta River, so I’ve made a distinction by using cooler blues for that freshwater. Although in reality the freshwater of the river and the salty seawater get mixed at the river mouth, accompanied by ebb and flow.

I wanted to show the Opera House, probably the most well known piece of Sydney or even Australia, the way I’ve seen it in real life. It looks like there are just these large white areas, but in reality there are hundreds of thousands small tiles attached in a kind of mosaic pattern.

Those details were too small to draw (I’ve tried, but erased it again, as you can see on the pictures), but I was able to draw the larger patterns formed by the tiles. And I’ve used Polychomos pencils in similar colors as the real tiles. I’ve found some clear pictures of the patterns as an example and I’ve also used some pictures from the Internet for the shading of the Opera House. 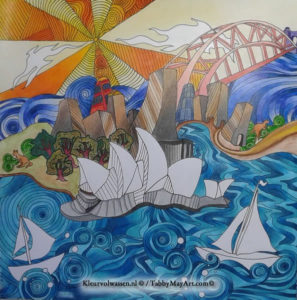 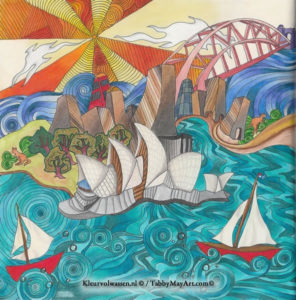 Working with the Polychromos in this book was really nice. Layering was easy, blending too, and instantly saturated coloring went fine also. On some parts I’ve used a blender pencil, because there were tiny white dots still visible, especially in the buildings.

But with the water and sun rays I’ve used lighter colors for blending, which worked way better than a blender pencil. Actually I think it always takes some adjustment and getting used to a new book, because of the combination of paper and pencils, which is most of the time different in each book (depending on i.e. the toothing of the paper).

The watercolor pencils were great in this book. I’ve only got four colors of Faber-Castell Albrecht Dürer, yellow, green and two browns, so I’ve used them for the park, the trees and the kangaroos. I’ve worked with a Caran d’Ache water brush, but with a minimum of water. The brush was just a little bit damp, not wet. The paper doesn’t show that it has been touched by water.

I decided that the sun needed shades of orange, because I figured it was a setting sun. The sun in Australia sets west, exactly on the opposite side compared to the Northern Hemisphere. Back then it was a very special sensation to view this, and I liked putting that experience into this drawing.

I’ve given the sailing boat on the right a tiny Australian flag… barely visible, but I know it’s there haha. And with that this drawing was also finished.

Note: The difference in colors between the last Sydney picture and the rest is because the last one is a scan, the rest of them are photographs.

Because I was really curious how felt tip pens or brush pens would do on this paper, I decided to color another drawing, this time with the Tombow Dual Brush ABT pens (water based markers). To go easy on myself I just picked the drawing next to Sydney and ended up in Memphis, USA, where Elvis Presley used to live. 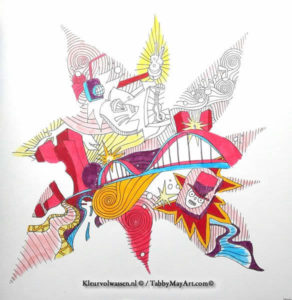 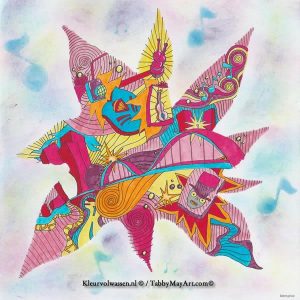 To keep it simple I chose a couple of bright colors and started coloring around. On some spots I’ve done an extra layer to get a more equal color, which resulted in bleeding-through to the back of the page. My own fault, I was impatient and didn’t want to wait for it to dry before I applied the next layer.

Where I applied an extra layer after patiently waiting for the previous layer to dry, there’s no bleed-through. When I want to color the design of Vienna (which is on the back of the page) I’ll have to come up with some creative solution to mask a couple of red and pink stains.

To finish the Memphis drawing, I’ve used a couple of Faber-Castell Creative Studio soft pastel crayons in the same colors and creatively swept some of it on the paper with a cotton pad. In our kitchen I found an old cappuccino coffee template with musical notes, bought once and rarely used, so that has found a new purpose now too, haha.

The pastel worked very well on the paper. Applying it was easy, it stayed on the paper very well and when necessary it could easily be erased with a kneaded eraser.

Just to make sure that Memphis and Sydney wouldn’t get mixed up by accident, I’ve used a fixative on the pastel. It’s nicely fixated now and won’t wear off. For the finishing touch I’ve transformed a couple of small circles into water drops and applied a bit of shine here and there with a white Signo Uni-Ball gel pen.

Final words on this book

My conclusion is that The Magical City is a great book to color. It tickles your fancy and it brings back memories when you’re coloring a drawing of a place where you’ve been before. It’s suitable to color with many different materials, from ordinary colored pencils to watercolor pencils, felt tip pens to soft pastel crayons.

In short, in my opinion this book gives a lot of value for your money.

If you liked this review, why not share it on social media!