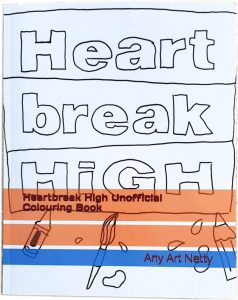 Let me start by saying that I have never ever seen anything from this series. Not one episode, not even one second of an episode. So I have no idea who the characters, or actors playing them, are, nor do I know what they look like.

In all honesty, I bought it because I wanted to support Netty*. But I also want to state specifically that I want to give my honest, unbiased opinion when I write a review. So that’s what you’ll get below!

When I received this Heartbreak High coloring book, I had no clue AT ALL how on earth I would be able to color in these drawings of people I’d never seen. Their eyes are blank, the drawings actually only consist of some black lines showing the character’s contours and a minimum of details. This requires imagination from the colorist, as well as some sort of courage.

This is a totally different coloring book than any other coloring book in my collection. Watch my flip-through video below, you’ll see exactly what I mean, and of course you’ll see all the drawings in the book!

I decided to let it rest for a while and didn’t look at the book for two weeks. This gave my brain the time to adjust to the idea of having to color faces and hair. That’s something I rarely do, because I totally suck at it (in my humble opinion ?).

Details about the book

This Heartbreak High coloring book (for the English among us ‘colouring book’ ?), is a self released POD (Printing On Demand) book, using the services of Amazon.

Three years ago, I’ve made a video of a paper comparison, comparing three different kinds of coloring books, two of which were from Amazon. You can find that blog and video here.

For today’s review I’ve colored in two drawings, and used several materials. Because of my previous experiences with Amazon paper, I didn’t color a page solely using colored pencils, assuming that the paper would most likely not stand that test (especially when it comes to blending). Like all Amazon POD books, the paper is quite thin and not particularly designed for coloring books. (But I might try pencils some other time, and if my conclusion is different, I’ll update this post!)

The book contains 42 pages with drawings of characters from the series. As mentioned earlier, I have no idea what these people look like in reality. On the one hand that’s inconvenient (in comes the courage), on the other hand it’s giving me the total freedom of making them look whatever I want them to (hello imagination).

A great advantage of this coloring book is that it’s printed single sided, which I really like.

The drawing I started with, was the second one in the book: ‘Nick and Jodie’. I decided to use alcohol markers: Promarkers and Brushmarkers by Winsor & Newton (previously Letraset). This went very well on the paper. I was actually pretty surprised how good this worked out.

(I’m only talking about how the markers and the paper reacted, not about my coloring skills ?. This is sooooo far out of my comfort zone!)

Anyway, I took some pictures during the process to show you my progress. 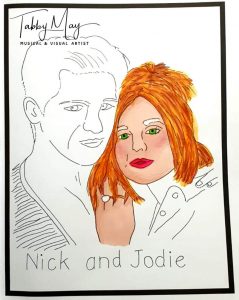 Like I said, I started using alcohol markers. They blended very well and I was surprised that they didn’t spread over the lines as much as I expected. 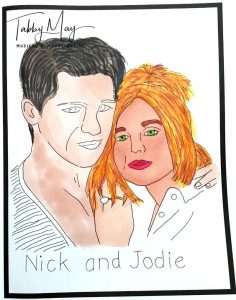 Obviously, like any alcohol marker they did bleed through the paper. So to prevent damaging the drawing on the next page, I put two sheets of regular printing paper between the pages, to cover the next page. 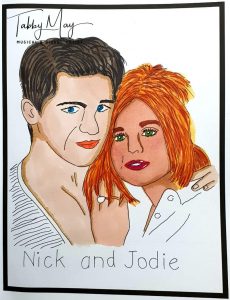 After coloring their hair and skin, I decided to use some other materials as well. So for Nick’s eyes I used Faber-Castell Pitt Artist Brush Pens. And for some accents I used a small white Posca pen. 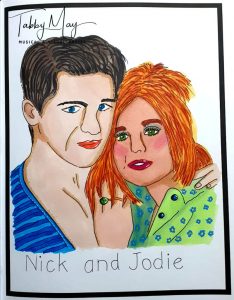 For Jodie’s ring I also used Derwent Procolour pencils and a Pigma Micron fineliner size 005. On her shirt I added some flowers using Posca Pens. And finally the end result. I used metallic grey PanPastel for the background. 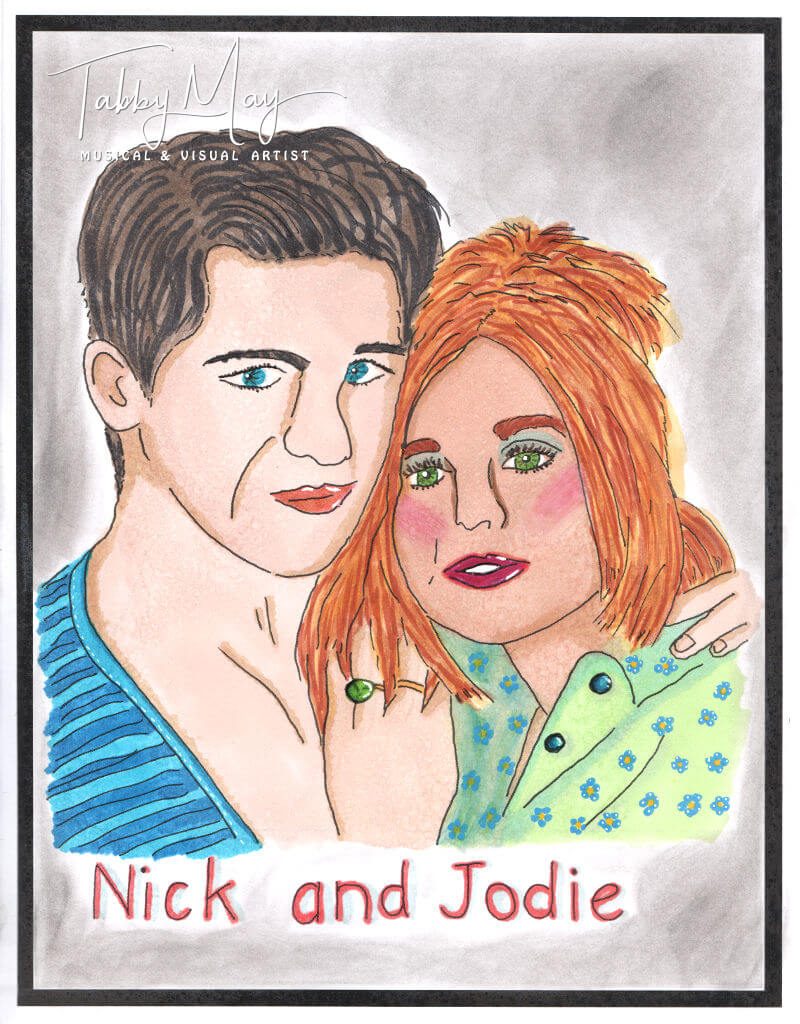 Well, after all I had more fun coloring this drawing than I had imagined beforehand! And I’m satisfied enough with the result.

In fact I felt so inspired, that I decided to color another one! For the second one I picked ‘Chaka’. A name I associate with ‘Chaka Khan’ and with a Dutch ‘positivity guru’ called Emile Ratelband (from his ‘Tsjakkaa’ therapy ?, which is pronounced almost the same). 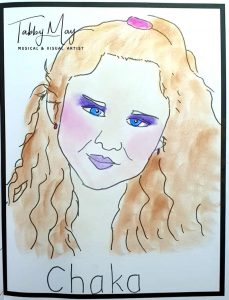 To do something different than the previous drawing, I decided to color this one with PanPastel. I started coloring her hair with a light gold shade. Then I added copper, brown and a reddish brown. To finish her hair I used Derwent Procolour pencils. 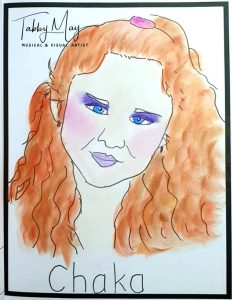 Her cheeks look a bit too pink in the picture, but in reality they are looking way more natural haha. 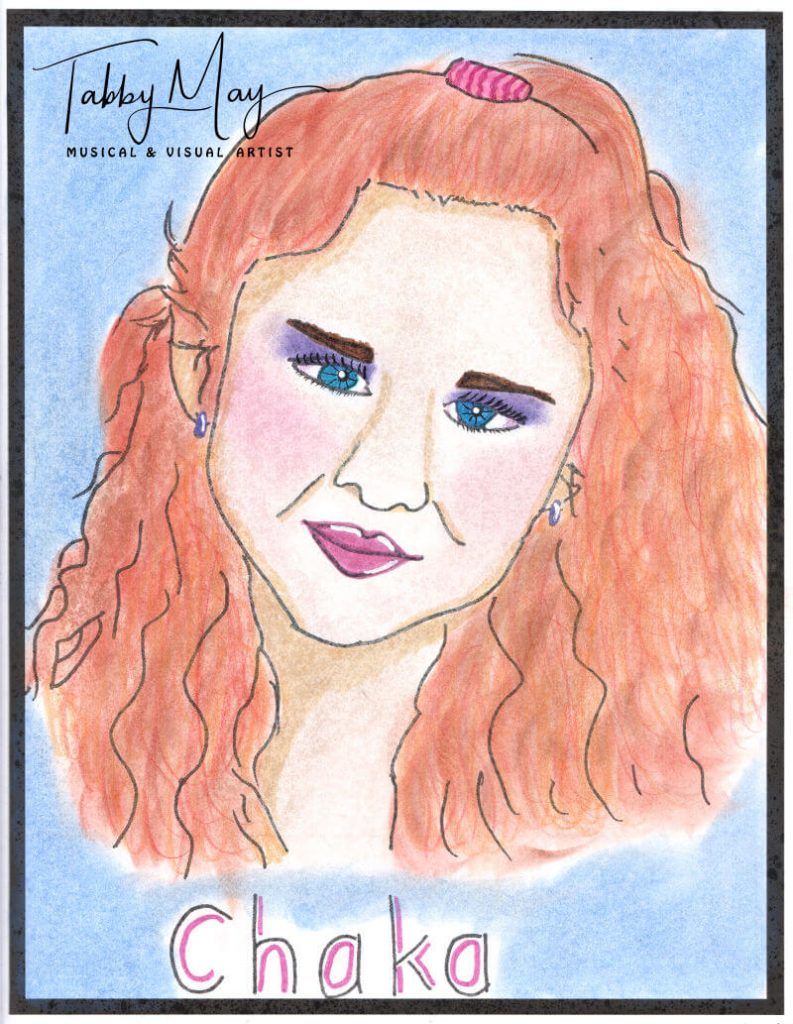 Because I didn’t like the lilac color of her lips (which was pearlescent PanPastel), I used a Faber-Castell Pitt Artist Brush Pen again to change them into something I liked better. After that I added some highlights with the white Posca Pen and for her eyelashes I used the Pigma Micron 005 again.

To finish this one up, I used blue PanPastel for the background.

And that brings me to the end of this review. Although I’m not a fan of coloring faces and/or hair, I was surprised how much fun I had with the two drawings that I colored in this Heartbreak High coloring book.

It was a bit of a challenge to see what I could do and how far my skills would reach, but the fun I had was paramount to me. I can be a perfectionist, expecting a lot from myself (and from others, sometimes?), so I was a bit scared that this book would be too much for me. But it wasn’t!

Even when you, like me, have no idea who the characters are and have no idea what Heartbreak High is, it’s still fun to color in this book. To see the faces grow into ‘someone’, getting character and expression, is a lovely process to experience.

I’m pleased that I bought this book, because it has taught me that it can be very nice and relaxing to do something you would normally not consider doing.

Well, that’s it for now. Next blog will be up in a couple of days at the most, since I still have a story to finish… ?.

* NOTE: Right after I posted this review, Netty unfriended and blocked me on all her social media. The only place I wasn’t blocked, on her FB page, I asked her through messenger what is going on, resulting in getting blocked there too. I have no idea why, I didn’t get an answer. As a result I’ve deleted the blog post I wrote about her where I link to her socials and asked my readers to follow her. I’ve thought about deleting this review too, but I don’t see why I should delete an honest and objective review. I did delete the link to get your own copy of her coloring book though. If you want it, you may Google it.

ADD: after a Google search I did afterwards to see what the characters look like in reality, I discovered a picture of the ‘Chaka’ character… and Netty seems to have drawn a copy of that exact picture. I hope for her that she had permission to do this as well as permission to sell her drawing in a coloring book, because otherwise it’s just a plain copyright infringement. I haven’t checked the other drawings (I’ve got better things to spend my time on).

Disclosure: I have no affiliation with Amazon. This coloring book I’ve bought myself. Also note my Disclosure Promos page!